LeBron James entered Thursday's matchup with the Portland Trail Blazers 0-3 in debuts with his new teams.

Led by Damian Lillard's 28 points, the Trail Blazers spoiled LeBron's Lakers debut by defeating Los Angeles by a final score of 128-119. The Lakers went toe-to-toe with the Blazers for three quarters, but Lillard, Nik Stauskas and Zach Collins all came up big for Portland down the stretch.

MORE: A look back at LeBron's supporting casts | Questions for LeBron | Get League Pass for the season

If you missed any of the action, check below for stats, highlights and updates from LeBron's debut with the Lakers.

This one's for you, Paul. #RipCity pic.twitter.com/fauxX6CK9g

LeBron led the way for the Lakers with 26 points, 12 rebounds and six assists. Josh Hart came up big off the bench, scoring 20 points and coming up with three steals.

For the Blazers, Damian Lillard had a team-high 28 points, scoring 10 in the fourth quarter alone.

1:13 a.m. - If there's one thing in this world you can always count on, it's Damian Lillard coming up big in the clutch.

1:09 a.m. - Never mind. Back-to-back triples from the Los Angeles Lakers has cut the Portland Trail Blazers lead to seven points with 1:24 remaining. This could get interesting.

12:54 a.m. - Zach Collins is quietly having a great all-around game with six points, five blocks and five rebounds off the bench. The Portland Trail Blazers have outscored the Los Angeles Lakers by a whopping 24 points with him on the court tonight, giving him the highest +/- in the game.

12:50 a.m. - Nik Stauskas is at it again! A 3-pointer from the Canadian gives the Portland Trail Blazers a 107-100 lead and forces Los Angeles Lakers head coach Luke Walton to take a timeout.

Nikolas Stauskas is on FIRE 🔥 pic.twitter.com/jwVvDGll6l

12:43 a.m. - Josh Hart has been fantastic for the Los Angeles Lakers on both ends of the court tonight. He has 17 points, three steals, two rebounds and one block in 20 minutes off the bench.

Don't be surprised if Hart ends up starting for the Lakers at shooting guard for most of this season.

12:38 a.m. - We have a close one, folks. A buzzer-beater by Josh Hart makes this a two point game going into the fourth.

Josh Hart beats the third-quarter buzzer from beyond the arc! 🚨👀#LakeShow pic.twitter.com/ZWTpgeLfKq

12:26 a.m. - Brandon Ingram is carrying the Los Angeles Lakers in the third. With 4:08 to spare, he has 10 points in the quarter. The Lakers are back in business.

10 of his 14 points have come in this third quarter. Lakers back within 2.

They currently have 50 points in the paint, 11 from the free throw line, two from midrange and ... zero from 3-point range. They're 0-for-12 from distance as a team. 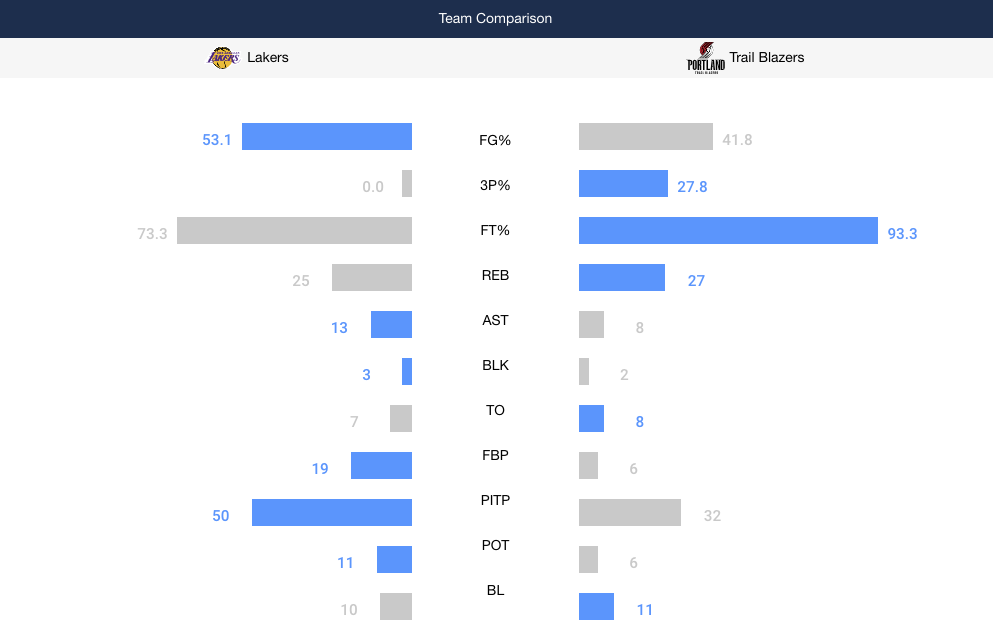 The Lakers are still in this one, though, trailing by only two points heading into the third.

The leading scorer for Los Angeles is LeBron James, who has 18 points on 6-for-10 shooting from the field.

The leading scorer for Portland? That would be Nik Stauskas, who has 16 points in 12 minutes off the bench.

11:38 p.m. - LeBron James picks up his third foul of the game with 6:04 remaining in the second, but Los Angeles Lakers head coach Luke Walton is keeping him in the game.

The last one was deep, too.

The King is wasting no time.

LeBron James with 13 points on 5/6 shooting in his first quarter in purple and gold. pic.twitter.com/7r88F56BCv

LeBron James currently has 13 points on 5-for-8 shooting from the field. The Lakers have also gotten six points out of Kyle Kuzma off the bench.

For the Blazers, Damian Lillard has a team-high 13 points.

11:18 p.m. - Back-to-back triples for Nik Stauskas to close the first quarter! That's what the Portland Trail Blazers are looking for from the Canadian this season.

11:07 p.m. - That LeBron James guy? Still pretty good at basketball. He has 11 points in seven minutes of action on 4-for-5 shooting from the field.

The Los Angeles Lakers have also gotten some great minutes out of Kyle Kuzma so far. They're +8 since he checked in for JaVale McGee at centre.

LeBron throws it down for his first @Lakers bucket! 🔨#LakeShow pic.twitter.com/0cPpSrWaHc

And here's the second:

Talk about an explosive start.

Rondo with the reverse for the first bucket of the #LakeShow season!

10:43 p.m. - LeBron James is introduced for the first time as a Los Angeles Laker.

LeBron James is introduced for the 1st time as a Laker. pic.twitter.com/Wh3RhY1IJ4

10:22 p.m. - LeBron James will come off the bench in his Los Angeles Lakers debut.

8:24 p.m. - Damian Lillard will wear a special pair of sneakers tonight as a tribute to Portland Trail Blazers owner Paul Allen, who passed away earlier this week from complications of non-Hodgkin's lymphoma.

🙏🏽 RIP Paul Allen🙏🏽@Dame_Lillard will be paying homage to the great Paul Allen with these kicks. Love being part of something special like this. Good luck fam! pic.twitter.com/z12ZzYEcNF

8:05 p.m. - LeBron James is in the building for his Los Angeles Lakers debut! We're less than three hours away from game time.

The 👑 has arrived #LakeShow pic.twitter.com/ADdG8ZJS9F