LeBron James sent shockwaves throughout the NBA this offseason when he signed a four-year deal with the Los Angeles Lakers to open free agency.

Going into his 16th season, James is joining a young - but promising - roster that will rely on the talent of Lonzo Ball (20), Brandon Ingram (21), Josh Hart (23) and Kyle Kuzma (23) quickly meshing with 33-year-old James and veteran acquisitions Michael Beasley, JaVale McGee, Rajon Rondo and Lance Stephenson. Somewhere in the middle lies sixth-year guard Kentavious Caldwell-Pope, who is still just 25-years-old.

To get an idea of whether or not there is a formula for a successful LeBron James-led team, let's take a look back to notable teams of his past, and how they measure up with these Lakers…

In 2003, James was drafted first overall by a Cleveland Cavaliers team that finished 17-65 in the 2002-03 season. James made his NBA debut alongside the likes of Ricky Davis, Carlos Boozer, Zydrunas Ilgauskas and Darius Miles.

In two separate midseason trades during James' rookie year, Davis was sent to Boston while Miles was dealt to Portland.

LeBron earned Rookie of the Year honours by averaging 20.9 points, 5.9 assists and 5.5 rebounds over 79 games. He and Boozer had the makings of a formidable duo - the two represented the Cavs at the Rookie-Sophomore game during All-Star Weekend. Although they finished 12 games under .500, the 2004 Cavs missed the postseason by just one game.

Despite his success in his one season playing with James, Boozer signed with the Utah Jazz in 2004.

James, who averaged a career-best 31.4 points per game in his third season, led Cleveland to its first 50-win season in 13 years. After acquiring Drew Gooden, Eric Snow and Anderson Varejao in the 2004 offseason, the team signed Larry Hughes, Damon Jones and Donyell Marshall in the offseason of 2005.

With contributions from the recent acquisitions, as well as Zydrunas Ilgauskas, Cleveland earned the East's fourth seed and took the No. 1 Pistons to seven in the conference semifinals.

With James a year older and better, Cleveland essentially rolled out the same roster from a year prior with the addition of rookie guard Daniel Gibson. James' stellar play resulted in one of the most memorable performances in postseason history and an improbable Finals run for the Cavs.

The 21-year-old Gibson broke out in the postseason and was Cleveland's second-leading scorer in the Conference Finals series win over the Detroit Pistons. In a closeout Game 6, Gibson exploded for 31 points in 29 minutes to help send the Cavs to their first-ever NBA Finals.

LeBron won his first of four MVP trophies when he led the 2009 Cavs to a 66-win season - the best season in franchise history. Cleveland saw major contributions from Mo Williams, who earned his first and only career All-Star selection.

Led by the shooting of Williams, James, Gibson and Delonte West, the Cavs were the third-best 3-point shooting team in the league at 8.0 makes per game. Cleveland sputtered in the Conference Finals, though, when it met Dwight Howard and the Orlando Magic and lost in six games.

Following another playoff letdown in 2010, LeBron left the Cavaliers via free agency to join forces with Dwyane Wade and Chris Bosh in Miami. With 14 combined All-Star appearances among them, the trio became the immediate favourite in the Eastern Conference.

In the 2011 postseason, however, there was a significant dropoff after the Big Three, with third-year guard Mario Chalmers serving as the team's fourth-leading scorer with just 7.8 ppg. In year one, the Heat came up short in the NBA Finals, losing to Dirk Nowitzki and the Dallas Mavericks in six games.

The lockout of 2011 made a rough offseason even longer for the Heat, who desperately looked to improve. The team selected guard Norris Cole in the 2011 draft and signed two-time All-Defensive Team selection Shane Battier during the December free agency period.

James went on a tear in the postseason, averaging 30.3 points per game, and 25-year-old Mario Chalmers stepped up by averaging 11.3 points as a full-time starter. James and the Heat won the 2012 NBA title with a five-game series win over the Oklahoma City Thunder.

Players with Finals experience: 13 out of 15 (Chris Andersen, Jarvis Varnado)

After redeeming themselves in 2012, Miami prepared to defend its title by adding 37-year-old Ray Allen in the offseason. While the average age of the Heat's most prevalent lineups was under 30, Allen, 32-year-old Mike Miller and 34-year-olds Shane Battier and Chris Andersen played pivotal roles throughout the season.

During the 2012-13 season, the Heat rang off a 27-game win streak from early February to late March and cruised to the league's best record at 66-16. James earned his fourth MVP, averaging 26.8 points, 8.0 rebounds and 7.3 assists per game.

Miami won eight of its first nine playoff games before beating the Indiana Pacers in seven games to advance to the NBA Finals. In an instantly-classic series, Allen proved his worth as the Heat defeated the San Antonio Spurs to win a second-consecutive NBA championship.

After going 2-2 in four-consecutive NBA Finals appearances with the Miami Heat, James returned to the Cleveland Cavaliers, who featured 2012 Rookie of the Year Kyrie Irving along with recent lottery picks Tristan Thompson and Dion Waiters. The Cavs used the No. 1 overall picks from 2013 and 2014 to acquire three-time All-Star Kevin Love from the Minnesota Timberwolves. A new big three was born. 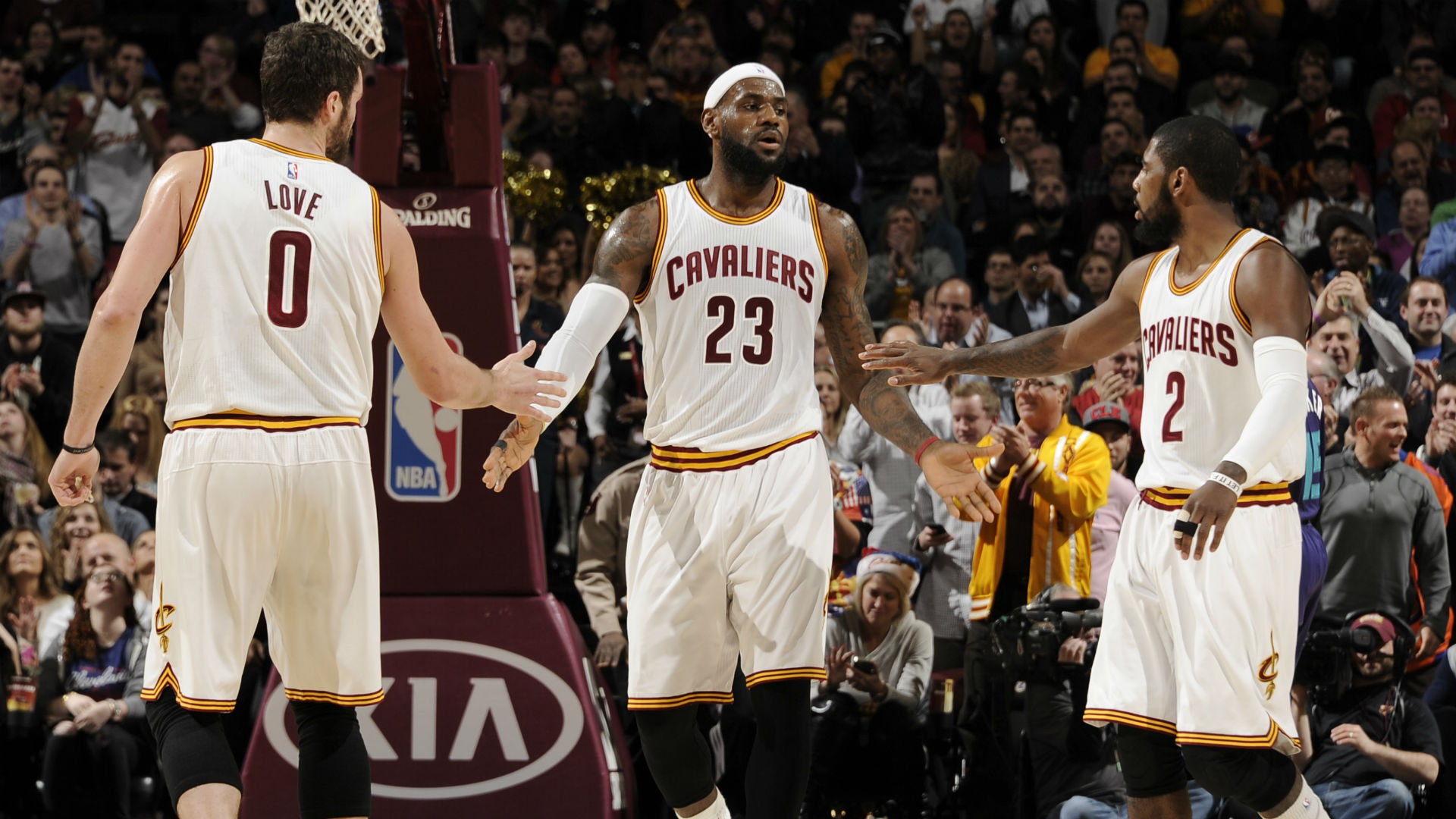 In the midst of a rocky start to the season, Cleveland parted ways with Waiters to acquire JR Smith and Iman Shumpert. In a separate deal, the Cavs acquired centre Timofey Mozgov from Denver.

It didn't take long for the lineup that was so successful to be completely decimated by injury. The Cavs' lack of health caused the Big Three to dwindle down to just James, ultimately resulting in a six-game NBA Finals loss at the hands of the Golden State Warriors.

Despite a 30-11 start to the season, Cleveland parted ways with its coach David Blatt and promoted Ty Lue. The team finished first in the East at 57-25 led by LeBron's 25.3 points, 7.4 rebounds and 6.8 assists per game. Irving missed 29 games, but was the team's second-leading scorer with 19.6 points per game while Love rounded out the Big Three's scoring with 16.0 points per contest.

Cleveland opened the playoffs on an absolute tear, sweeping the first two rounds before advancing past the Toronto Raptors in the conference finals in six games. The stage was set for a second-straight NBA Finals between the Cavs and Warriors - James' sixth-consecutive Finals appearance.

Though the Cavs were healthy this time around, they trailed 3-1 as the series moved back to California. James (36.3) and the 24-year-old Irving (30.0) combined to average 66.3 points per game in Games 4 through 7 to lead an improbable comeback and deliver the city of Cleveland its first professional title in over 50 years.

An offseason trade of All-Star Kyrie Irving signaled the end of Cleveland's Big Three and the beginning of a year filled with change. The Cavs rolled out 30 different starting lineups throughout the course of the 2017-18 regular season and many thought James' consecutive NBA Finals streak was coming to an end.

Still, Cleveland had two All-Stars in James and Love, won 50 games and earned the East's fourth seed. In one of his biggest career feats, James averaged 34.0 points, 9.1 rebounds and 9.0 assists in the postseason to lead the oldest Cavs lineup he's been a part of to the 2018 NBA Finals. Love, the Cavs' second leading playoff scorer, averaged 14.9 points per game.

James could only do so much; despite a 51-point performance in Game 1 of the Finals, Cleveland failed to win a game and was swept by Golden State.

At times, the Lakers will roll out a lineup of Ball, Hart, Ingram, Kuzma and James - five with an average age of 24.4 years.

MORE: How Ingram can make LeBron better | How Ball can become perfect point guard for LeBron

With this being one of the most unique rosters James has been a member of, it's difficult to project how LA will fare over the course of the 2018-19 season, but there is no question that the talent is there. Ball and Kuzma were both named to the 2018 All-Rookie teams and Ingram earned All-Rookie honours in 2017. Josh Hart was named 2018 Summer League MVP and the team is high on rookies Moritz Wagner, Svi Mykhailiuk and Isaac Bonga.

While it's unknown how things will fall into place, history has proven one thing time and time again: With LeBron in the fold, the team always has a chance.

Jokic, Young named Players of the Week
NBA.com Staff
1h ago NBA
Gobert (calf) out vs. Suns
Gilbert McGregor
4h ago Utah Jazz
Power Rankings: Who has impressed most in the season's first half?
Kyle Irving
6h ago NBA
What channel are tonight's games on?
NBA.com Staff
9h ago NBA
Tatum erupts for 51 to break out of slump
Gilbert McGregor
10h ago NBA All-Star 2022
Butler passes LeBron in Heat's record book
Yash Matange
11h ago Miami Heat
More News