When LeBron James left for the Western Conference last offseason, that sound reverberating throughout all of Canada was the collective sigh of relief that their biggest nemesis and mastermind behind their most painful postseason memories was finally out of the Eastern Conference.

Gone was the tormentor.

Gone was the player that they had no answer for.

Gone was that sinking feeling that come May, there would stand an insurmountable figure blocking the pathway to the promised land.

Unshackled from the burden of fretting over LeBron's ominous presence, this would be the year that one player alone wouldn't be the difference between a spot in the NBA Finals and an earlier-than-anticipated exit.

That was the prevailing school of thought.

Unfortunately for Raptors' fans, it have may have been false hope.

These Raptors have an answer for lots of things in the East.

They have depth and versatility to match styles, to play big or small, to play fast or slow, to play straight up or switch. Masai Ujiri's team is built for the postseason when operating as a chameleon is imperative for the inevitable adjustments that good teams force you to make.

All of that aside, there's one question that looms large as we enter the home stretch:

Can the Raptors stop Kyrie Irving?

If the last two meetings between the Raptors and Celtics are any indication, the answer is a resounding no.

Back on November 16, he scored a season-high 43 points to lead Boston to an overtime win. ln the next meeting on January 16, he dished out a career-high 18 assists while pumping in a team-high 27 points.

He scored or assisted on 25 of Boston's 28 made shots in the fourth quarter and overtime in those games, torching anyone who tried to stop him from getting whatever he wanted, whenever he wanted it.

Irving, who is widely regarded as one of the most clutch players this league has to offer and author of perhaps the biggest shot in NBA history, is saving his best for late in games against the Raptors. That is not a good sign for a team that's all-in on making it to the NBA Finals this season.

He's dominating the Raptors in the regular season in a way that no player other than LeBron James himself has ever done. Even in the first meeting back in the second game of the season in which the Raptors won by double digits, Irving scored 21 while making half of his shots. Granted, he failed to get to the line a single time and didn't have that 'put-the-team-on-his-back' moment, but he didn't exactly put up a 5-for-22 stinker either.

MORE: "I still don't see anybody beating us in seven games."

You don't need me to type the name to know who it is. 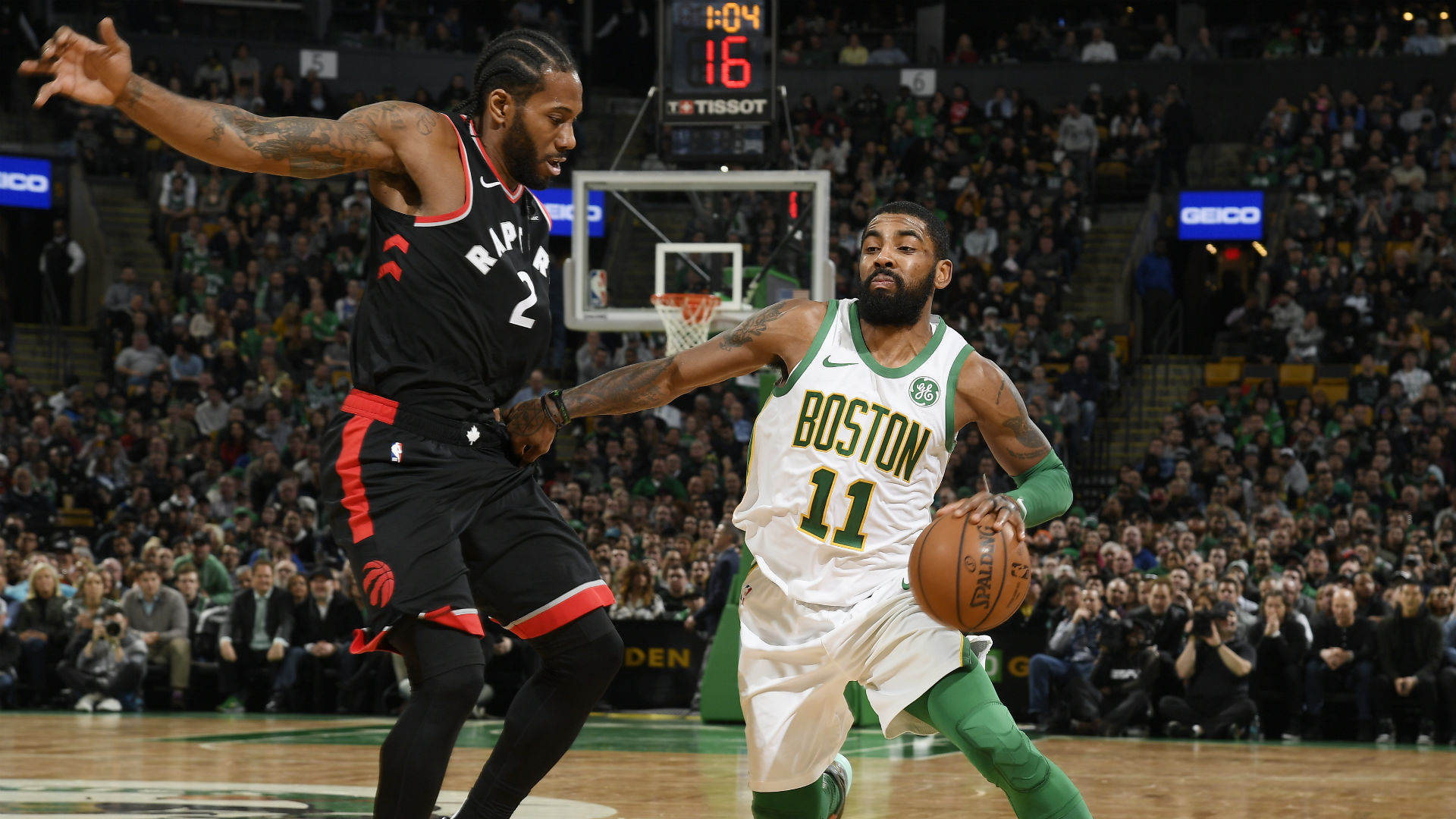 Who should guard Kyrie?

It's a loaded question.

For starters, let's dispel the notion that it falls on the shoulders of any one person.

Irving is on that short list of players who can't really be stopped by any one individual. He's such a brilliant offensive force that it truly takes a team effort and scheme to slow him down.

His shotmaking from pretty much anywhere is legendary. And as the Raptors so painfully found out in the last meeting, sell the farm to force the ball out of his hands and he's a gifted enough playmaker to still make you pay time and time again.

One potential solution - and one that Nick Nurse might not opt for in the final regular-season matchup or even early on in a playoff series - is to hand the assignment over to Leonard. He's averaged about 10 possessions per game matched up against Irving, far fewer than either Danny Green or Kyle Lowry who have spent the lion's share of the time guarding Irving. There's a trade off in that it takes Leonard off of Jayson Tatum, whom he has locked up, but that could be a sacrifice that needs to be made.

In general, keeping bigger bodies on Irving and playing Lowry, VanVleet and Lin on Boston's other pieces could be the way to go. Of Irving's 11 turnovers in the season series, 10 have come when guarded by someone 6'4" or bigger while he's turned it over just once in 85 times down the floor matched up against either Lowry or VanVleet.

It's also impossible to overstate the importance of Marc Gasol in slowing down Irving's probes into the paint. While he may no longer be an elite rim protector or fleet of foot, Gasol's positioning, timing and communication remain among the very best in the league and should be crucial against one of the league's best at getting into the teeth of the defence.

There is no easy answer to who should guard Kyrie which is in part what makes the proposition of stopping him all the more complicated.

Regardless of how complicated it may be, the Raptors have one more opportunity on Tuesday to try and uncover some semblance of a strategy for slowing him down.

If they don't, they're in very real danger once the calendar flips to May of once again running into an all-too-familiar foe happy to send the Raptors packing.