The Toronto Raptors are home.

To open the 2021-22 NBA season, the Raptors hosted the Washington Wizards at Scotiabank Arena, marking the first time in 600 days that an NBA game was played on Canadian soil. As expected, emotions were high and the capacity crowd was electric, but the Raptors were unable to come out on top.

Yes, a game was played, but the story of the night centres around the new era of Raptors basketball getting its start in front of nearly 20,000 fans that had been apart from their team for far too long.

With that in mind, relive some sights and sounds from the Raptors' return home.

Hours before tip-off, the Raptors shared an image of the opening-night t-shirt giveaway. The message it read was rather simple: "We Back."

Prior to pregame player introductions, a poem from Canadian spoken word artist Hannah Flores titled "We Back" was played on the jumbotron.

Home is not just a landmark on Bay St anymore. #WeTheNorth pic.twitter.com/Zbwd9tO70Q

During the pregame presentations, all members of the Raptors stood side-by-side at mid-court 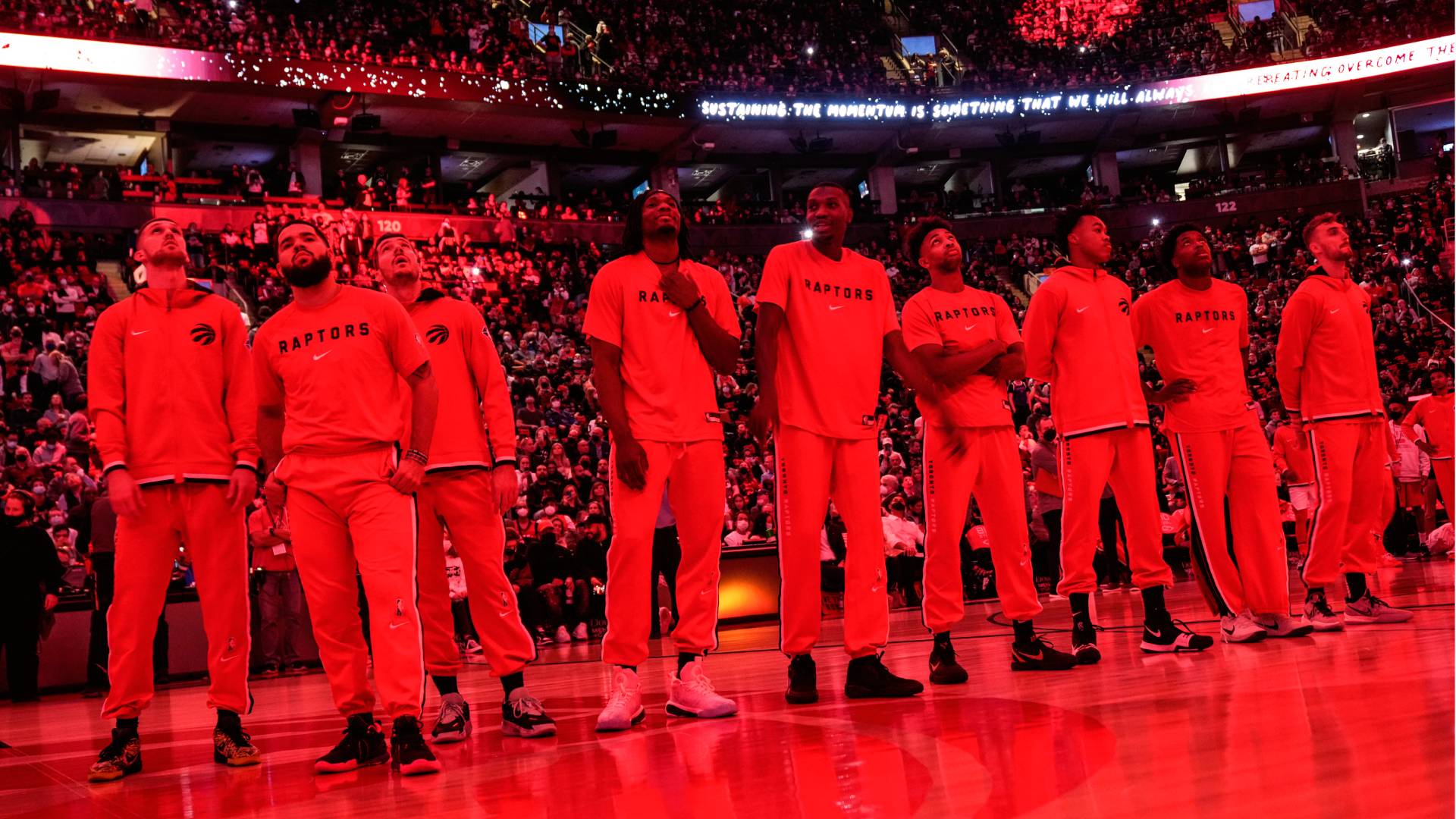 When the lights came on, Fred VanVleet addressed the fans, saying "it feels good to be home."

"Let's get it" - Fred VanVleet addresses the crowd in Toronto ahead of the home opener. pic.twitter.com/0akF944HnI

To tee up the crowd for player introductions, Canadian rap icon Kardinal Offishall performed "The Anthem" with a new verse shouting out this year's Raptors roster.

Per opening night tradition, the entire Raptors team was introduced, beginning with the reserves and inactive players. As expected, Pascal Siakam received the loudest ovation among the group, but it was rivalled by the crowd's adulation for Rexdale's own Dalano Banton.

It's hard not to get chills watching the Toronto native's dreams come true in real-time.

When the starters were introduced, it was a given that Scottie Barnes would bring the energy.

A warm Toronto welcome for Scottie B. 😎 pic.twitter.com/G06NUlYbzV

Among the 19,800 in attendance: Raptors Global Ambassador and Grammy Award-winning artist Drake.

Once the game was underway, it was all business. 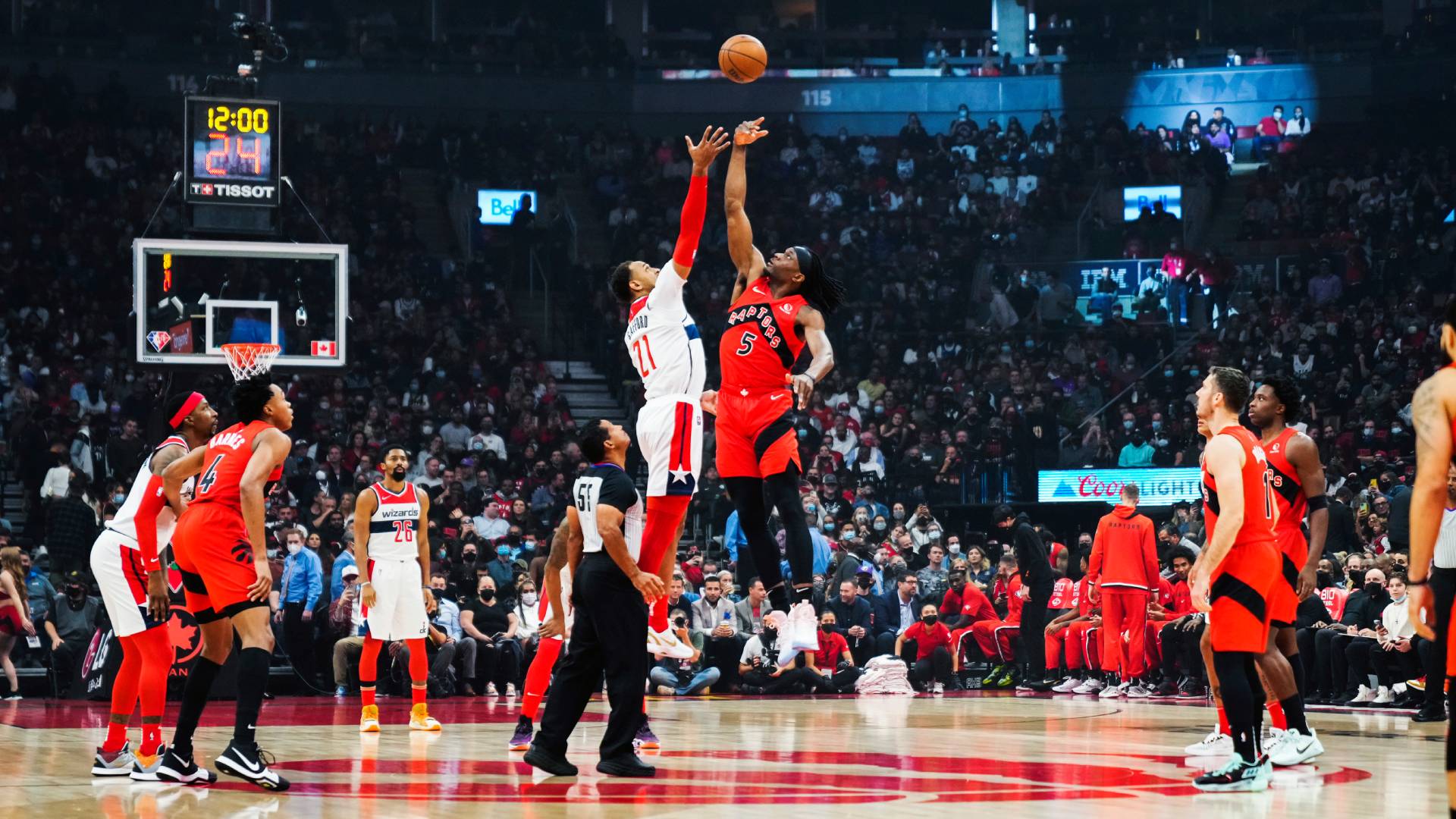 Of course, it was VanVleet that got the Raptors on the board first.

How about this for Precious Achiuwa's first bucket as a Raptor?

Or the first of many points in Barnes' career?

And though the game seemed out of reach by the end of the third frame, no one will forget the way in which Banton's first-ever career points came. A half-court heave at the buzzer? Somehow, the story just gets even better.

Banton's assist to Chris Boucher is representative of a major moment in which three Canadians took the floor at the same time for the same NBA team, the other being Khem Birch. This was just the second such occurrence in league history. The first? Came mere moments earlier in Detroit with Cory Joseph, Trey Lyles and Kelly Olynyk.

No Raptors coverage is complete without documentation of superfan Nav Bhatia's attendance.