Welcome to "One Play!" Throughout the 2021 WNBA season, our NBA.com Staff will break down certain possessions from certain games and peel back the curtains to reveal its bigger meaning.

Context: Allie Quigley and the Chicago Sky got a big win on Sunday over the league-leading Seattle Storm. The Storm, of course, were without Breanna Stewart and Sue Bird, but a win over the defending champs who are ultra-deep is a big win regardless of who's in uniform.

Quigley finished with 17 points, eight rebounds and four assists in an 87-85 overtime win. Her 3-point shooting continues to be a valuable weapon for the Sky as she drilled five triples, including the game-tying three with 46 seconds left to force the extra frame.

The game-tying three is the subject of today's one play, so let's head to the film room.

Breakdown: Down by three against the Storm, the Sky need a stop in the worst way. They get one after Jewel Lloyd misses a fadeaway jumper.

Candace Parker clears the rebound and finds her point guard and the league-leader in assists per game, Courtney Vandersloot. 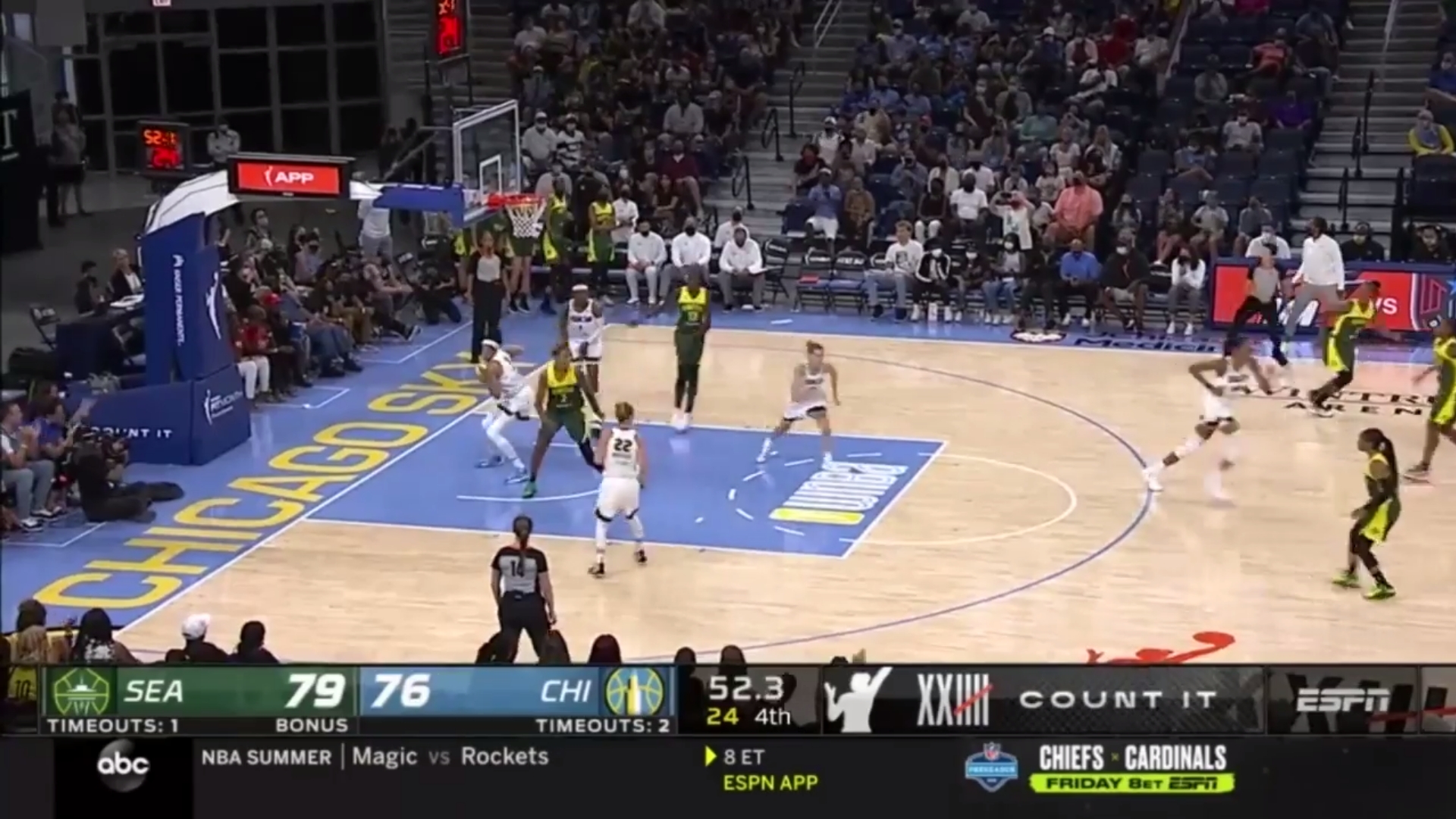 Vandersloot quickly dribbles up the floor creating a fastbreak opportunity for the Sky.

With the Storm defence scrambling, she finds a wide-open Quigley - who had just buried a 3 on the prior possession - and delivers an on-time, on-the-money pass to the sharpshooter who nails the 3 and ties the game.

Why it matters: The Sky haven't exactly been lighting it up offensively this season. Chicago is scoring at a rate of 98.8 points per 100 possessions at the time of this writing - good for ninth in the league.

Now some of that has to do with the injuries the team has faced as both Quigley and Parker have missed time.

And some of that has to do with possessions that look like this:

A way to turn those empty possessions into better scoring chances is to run, and Chicago has been doing plenty of that this season. The Sky play at the fourth-fastest pace in the league, according to WNBA Stats, and are second in fastbreak points at 11.7 per game. Those fastbreak points account for 13.5 percent of Chicago's offence.

If the Sky want to compete against the league's best teams like the Storm, Las Vegas Aces, Connecticut Sun and the surging Minnesota Lynx, they'll need to be able to put up points. And considering how stingy those four teams are defensively, it would benefit them to continue to try and push the pace and find easier looks.

The downfall with playing with pace is that you're prone to a mistake or two. The Sky are committing 16.0 turnovers per game, the second-most in the league. They have a turnover rate of 19.1 percent according to WNBA Stats, which is also the second-highest rate in the league. So playing faster has come with its consequences but if Chicago can clean up some of their self-inflicted mistakes, they'll be one step closer to where they want to be offensively.

The Sky's defence is already championship calibre, if their offence gets there too, they might be able to make a deep playoff run.

The views on this page do not necessarily reflect the views of the WNBA or its clubs.