In just his fourth game back from the hand injury that sidelined him for nearly four weeks, Norman Powell exploded for a career-high 37 points (on 13-for-21 shooting) to help lead the Toronto Raptors to an eight-point win over the Golden State Warriors Thursday.

MORE: What is Steph Curry's impact on Andrew Wiggins?

Thus continues a recent trend for the fifth-year guard, who has increased his scoring output in each game since his return to the lineup.

Over the last four, Powell is averaging 27.3 points, 3.0 rebounds and 2.3 assists while shooting 53.5% from the field and connecting on 35.5% of his 7.8 3-point attempts per game. As evidenced by his performance against Golden State, Powell has found ways to do a little bit of everything on the offensive end, from a number of spots. 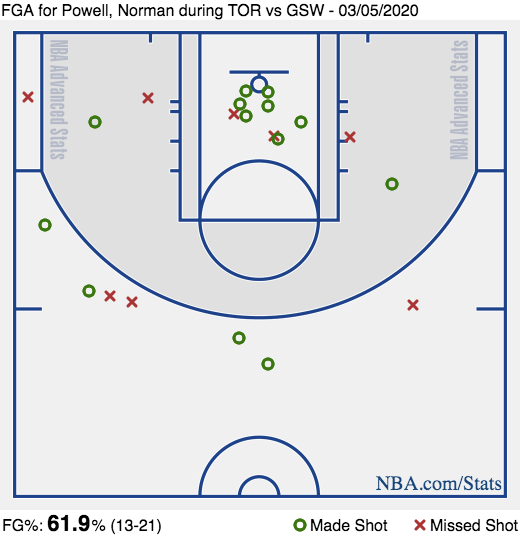 Following the game, head coach Nick Nurse spoke about Powell's performance and its reflection of his development into a three-level scorer, saying "when he gets in that mode, the ball seems to get to him and he's got a variety of stuff going - he'll go to the hole, hit a 3, hit a pull-up."

Nurse continued, saying "he'll make a lot of good decisions and he was (very) close to making a couple of other great ones."

Not only have Powell's coaches and teammates trusted him, but they've also held the belief that he was capable of making this leap as a player all season.

"This is what I'd hope happened with him this year," Nurse added. "Everybody was like, 'Well, what are you gonna do?' and there were lots of new opportunities here and it included him. We lost a guy at his position in Danny Green and Pascal (Siakam) fills in for Kawhi but I think we've always known that (Powell) can kind of vault up and get his own shot."

Six-time All-Star Kyle Lowry also talked about Powell's confidence and ability to vault up for shots, adding that this performance is par for the course this season: "He was confident in what he was doing and he got to his spots and was just kind of vaulting up and making shots and getting out in transition and making layups and doing what Norm's been doing all year."

This year, Powell is averaging a career-high 16.4 points, nearly doubling his previous career-best of 8.6 points per game, which came last season. He's also having his best season from an efficiency standpoint, with a career-best True Shooting Percentage of 62.9%.

Even Nurse admits that he couldn't have predicted this big of a jump from the fifth-year guard: "I think that we were hoping (this would happen). Maybe this is beyond, a little bit, but that's good."

"We have a couple of guys that keep going up to levels where we're surprised but I think his maturity level (has risen) - I just don't see the mistakes or the turnovers or the lapses on D. He just is playing like so much more of a complete basketball player."

Defensively, Powell was trusted with the task of guarding Stephen Curry more than any other Raptor, as he was Curry's primary defender for 13.3 partial possessions, according to NBA.com Stats.

In his walk-off interview with TSN's Jack Armstrong, Powell spoke on his thoughts regarding the task of guarding the two-time MVP: "I was actually really happy that the coaches trusted me to go out there and guard him, so I took it as a challenge."

That Powell stepped up to the challenge defensively while having the best scoring performance of his career bodes well for his future development as a two-way player with pure scoring ability.

According to Lowry, the various roles that Powell is assigned on a game-by-game basis allow him to continue to play freely: "I think it's confidence and understanding that his role is going to change every game and he doesn't have the pressure of this, that and the other. He can just go out there and play."

With a playoff berth clinched and just 20 games remaining in the regular season, the Raptors will look for Powell to continue his confident play as they prepare to make another deep run in the postseason.

His performance could prove to be the difference.

Toronto continues its five-game road trip on Sunday when it travels to the Golden1 Center to take on the Sacramento Kings at 9:00 p.m. ET on SN1.