Welcome to Cloth Talk! An ode to the phrase coined by DJ Khaled, NBA.com's Gilbert McGregor and Kyle Irving delve into all things style in the NBA. From uniform reveals to sneaker choices and everything in between, the two experts give their takes and provide clarity on concepts that are impossible to ignore.

In the latest edition, the two celebrate the legacy of Kobe Bryant by talking through their favourite models and colourways from his iconic sneaker line.

In the basketball world, Kobe Bryant's impact is felt every day but Aug. 24 is particularly special because the date (8/24) represents both of the numbers that he wore during his Hall of Fame career.

Kobe influenced us all. From the way in which he dominated to the mentality that he approached the game with. And he did it all in style.

Turn on basketball at any level, from high school to college to the WNBA, NBA and beyond, it's almost impossible to not see at least one player with a pair of Kobe's on their feet.

Behind Air Jordan, I'm not sure there's a more iconic signature line than Kobe's. I feel like you and I both have tons of memories tied to Bean's kicks, so where do we even start?

Kyle Irving (@KyleIrv_): Happy Mamba Day, man. It's still hard to fathom that Kobe's not with us anymore, but as you said, there are still so many ways his presence is intertwined with basketball, and that will never change.

His sneakers are certainly one aspect of his lasting impact, and from previous conversations, I know I speak for both of us when I say they're the best on-court sneaker line the game has ever seen.

I guess a good starting point would be this: Do you have a particular model that would mark your favourite pair of Kobe's? Or does it vary based on the colourway of each model?

McGregor: When it comes to on-court performance, there isn't a signature line more relevant in our lifetime. Jordan's first retirement came when I was four, so it wasn't like I was waiting for the newest Js to drop so I could hoop in them, and retro releases were almost always casual for me, cause why pass up on modern technology?

That being said, I think my favourite Kobe sneaker varies on both colourway and time period.

As a kid, I was intrigued by Kobe's robotic-looking Adidas shoes, but it wasn't until the switch to Nike that I was really influenced. They technically weren't in Kobe's line but I loved the Huarache 2K4s and 2K5s because of Kobe.

More than anything, I'm still upset that I never got a black and silver pair of 2K4s. I tried to make up for it, getting a black pair of 2K5s with the Kobe logo on the tongue in seventh grade. Then the Kobe 1's dropped, and that's a model that's getting better with age.

So, yeah, that's only scratching the surface of ones that might qualify as my favourites. Lol, I'm going to have to talk this through to narrow it down. What about on your end?

Irving: I swear, I almost forgot about the Huarache 2K4s. I had the black, silver and white ones and wore them until there was a hole in the sole. Like you said, even though those weren't a part of his signature line, I always associated them with Kobe because he was the first person I ever saw rocking them.

I definitely have a favourite pair of Kobe's, but there are also other pairs that sneak into my top rankings based on colourway.

For my outright favourite model, it's gotta be the Kobe 6s. The design, the snakeskin pattern, the comfort. They are my No. 1, all-time favourite basketball shoes.

To get more specific, I had the wolf grey colourway and my biggest regret was wearing them in an outdoor summer league. They were never the same after that and I wish I bought 10 pairs at the time that I got them so I could have a pair for the rest of my life, haha.

McGregor: First off, 10-year-old (and 27-year-old) Gil is extremely jealous you had the black and silvers. We still need a proper retro of that colourway. I'd waste no time getting a pair of those.

The 6s, though? Game-changer. Those take me back to my senior year of high school. The Grinches are one of the most iconic colourways of a sneaker ever. Then there was the Black "Del Sol" colourway I wanted (but never got) and the gradient pair my best friend got to play in AAU ball.

Naturally, a few weeks later, Kobe throws on that exact same gradient colourway to eliminate my Hornets in the opening round of the 2011 Playoffs.

Isn't it crazy how Kobe essentially made low tops OK? I remember Steve Nash and Luke Ridnour (random, I know) were two of the league's few low-top guys. Other guys have done it before, but Kobe did it full-time, starting with the Kobe 4s, which have a special sentimental value that I've mentioned before.

That run from Kobe 4-8 is a crazy run of low-top sneakers that really changed the way hoopers approached their footwear choices.

I do wanna point out this pair you may or may not have seen before. Similar to the Huaraches, Kobe introduced us to the Hyperdunk with his video "jumping" over an Aston Martin. Before switching to the 4, I remember Kobe wearing a Hyperdunk Player Edition (PE), but if you look closely, they have the sole of the Kobe 4.

Nice transition into changing the game.

Irving: I honestly feel like Kobe doesn't get the recognition he deserves for bringing low tops back to the NBA. I've always preferred low tops to high tops, but before Kobe's signature line, it felt like the mid-level kicks were the lowest any shoe designs would go. He really was a trailblazer in that aspect.

And of course, who doesn't remember that viral video? That went viral before going viral became something normal. Was it real? Was it fake? It took the internet by storm.

The Hyperdunks are definitely in my top-five favourite shoes to hoop in, too, but I want to stay on the topic of the Kobe 4s. I know those hold a special place in your heart, and I was going to pave a nice pathway for you to talk about them by saying that's a prime example of a certain colourway that helps those shoes work their way into the top tier of my favourite Kobe's.

I borrowed the "Lower Merion" edition from a friend during a different summer league and I never wanted to give them back. I offered to pay full price for his used pair but he wouldn't budge. 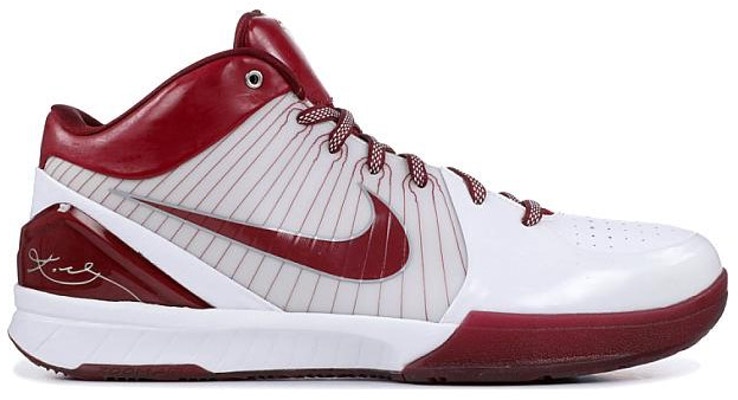 McGregor: Those Lower Merion's are super tough. I get why you'd try to get them off your boy and completely understand his unwillingness to let them go.

I think the stories behind the colourways are another part of what made Kobe's line so special. You've got the Lower Merion's paying homage to his high school days, the "Draft Days" that come in Hornets colours to call back to the now-infamous draft-day trade that sent Kobe to the Lakers, so on and so forth.

With respect to the 4s, the Carpe Diems will forever hold a special place in my heart. During my time as a ballboy in New Orleans, Kobe himself actually gifted me the Carpe Diems off of his feet and addressed them to me.

It was awesome to see them re-release in "Protro" form a few years back, and I still need to track down a pair to mirror those that Kobe gave me. It's also super cool to see players around the league playing in that colourway the past few seasons.

Speaking of current players, there are a lot of guys that have their own Kobe PE's now. DeMar DeRozan, Devin Booker, Khris Middleton and Isaiah Thomas come to mind before anyone else. I think it's fair to say DeMar is the King of wearing different Kobe models, so I guess a better question is, who wears the best colourways? Is that answer DeMar, too? Or someone else I didn't mention.

Irving: Along with that list of players, let's pour one out for Shai Gilgeous-Alexander's run at the throne of Kobe's, rocking obscure and hard-to-get colourways for the first two years of his career before switching signing a deal with Converse.

But with respect to Booker and Middleton keeping Kobe's featured prominently during their run to the NBA Finals, followed by some Team USA colourways after hopping on a jet to Tokyo to win Gold at the Olympics immediately after, I'd say DeMar still sits atop of that throne.

DeMar must have a couple of rooms in his house that are just filled with Kobe's. It's a seemingly endless number of models and colourways, to the point that it feels like he's never worn the same pair twice.

He rocked the Black History Month Kobe 7s at Media Day this past year, then followed that up with the Black History Month 8s on Opening Night. He had a pair of Kobe 6 Protos that were customized to match the San Antonio Spurs' "Fiesta" City Edition jerseys that were just not fair. I'd also give him credit for popularizing the Kobe 11s, which I still want to get my hands on to play in.

DeMar is the undisputed King of Kobe's, in my opinion.

McGregor: Man, Shai's #wholelottakobes movement was short-lived but impossible to forget. Have to take a moment to acknowledge that.

But yeah, it's DeMar at the top and then everybody else. Honestly, he shouldn't even be grouped with the rest of the league.

As you said, it's a unique blend of him digging in his own personal vault for colourways like the Black History Month 7s that released in 2012 and Nike blessing him with colourways like that Fiesta PE, among others.

Like, Book has the PEs to compete but might not be able to dig that far back into the vault. PJ Tucker has the vault and PEs, but he plays in much more than Kobe's. Gotta give it to DeMar.

I will say, though, this year, a sneaky candidate I'm excited to see is Malik Monk. A few years back he rocked the "Shark" Kobe 7s with the Hornets' "Classic Edition" uniforms. This past season, he quietly had some really nice PEs. Now that he's a Laker… keep an eye out.

Wondering if you think there's anyone else who could come with Kobe heat this season?

Irving: The player we've failed to mention so far but cannot let him slip through the cracks on the Mount Rushmore of Kobe's is Buddy Hield.

Hield wears Kobe's night-in and night-out. He dons No. 24 because Kobe was his favourite player growing up. He had that otherworldly performance the day after Kobe passed away, becoming the first player in 18 years, since the Mamba himself, to score 20 points in the fourth quarter on 100.0 percent shooting from the field in a 20-point comeback.

And he dedicated it all to his hero after the game.

Buddy did it for Kobe tonight. pic.twitter.com/ckGedjIYe2

It would have been disrespectful to have this discussion and not include Buddy Buckets.

McGregor: What a moment, man. It might come off as corny or cliché but that's exactly what we all mean when we say "Mamba Forever." Moments like those are exactly how Kobe's influence will forever live throughout the league.

The shoes? Well, they're just one of many physical reminders. And, as evidenced by all the players that make Kobe's their sneaker of choice, we'll be seeing plenty more of that in the years to come.