Two members of our Global NBA.com team debate and discuss one of the biggest issues that cuts to the core of filling out an All-Star ballot.

Micah Adams (@MicahAdams13): The third update for All-Star fan voting returns is coming on Thursday and there's a good chance that once again Trae Young will be leading all Eastern Conference backcourt players.

Young is putting up monster individual stats for a Hawks team that has the worst record in the NBA. In a way, he's the 2020 poster child for the "great stats, bad team" dilemma that comes up every year when it comes to All-Star voting. It's more nuanced of course, but it boils down to one simple question: how much should winning matter when it comes to making the All-Star team?

Gilbert McGregor (@GMcGregor21): While it should matter some, for a case like this, I don't think a team's lack of success should negate a player having one of the best statistical seasons of all players in the league.

That's ultimately what the All-Star honour is about, right?

Adams: Fans want to see the best players, period. But I do think there's a team component that helps in actually determining who is worthy. And it shouldn't be entirely ignored, even if it's more of a tiebreaker than a jumping off point.

So I take it you're in the camp that Young, Devin Booker and Brandon Ingram - not to mention Bradley Beal and Karl-Anthony Towns - should all be in?

McGregor: I'm all in on Young, Beal and Towns. Ingram and Booker is where it gets a bit tricky for me. That's where the tiebreaker component comes in.I don't think there are enough players out there having a season worthy of the argument that they belong in the ASG over those three.

Beal's definitely the second-best shooting guard in the league this season and Towns is one of the most gifted centres - if not the most. Young's numbers speak for themselves.

But when we start talking Ingram and Booker, there are just some guys out West that I think might get the edge in a tiebreaker argument.

Adams: I know I'm the one who brought up those other names, but let's stay on Young before diving into some others, because his case is in many ways a caricature for this entire debate.

MORE: How Trae Young stacks up with an NBA legend

So you don't think Young deserves any blame for the Hawks being by far the worst team in the league? Or is it that his stats are too gaudy to overlook?

McGregor: His numbers and his style of play scream All-Star to me. His 28.9 points and 8.4 assists per game are both in the league's top five. The only other player in the league that's in the top-five in both categories this season is Luka Doncic. He's also made the sixth most triples in the league this season.

That tells me he's doing all he can and then some for a team that just isn't that good. He's scored 40 or more six times in his first 36 games and they're 2-4 in those games. Atlanta has put some pieces around him but it's a young team that hasn't put it together yet.

Adams: He's been offensively prolific which is unassailable. I can't argue that.

But this is also a Hawks team that going into the year generated some buzz about potentially making a run at the playoffs. I know that John Collins was suspended for 25 games, but as by far the best player on the team, shouldn't the Hawks drastically underachieving - at least according to most preseason projections - fall at the feet of Young?

And by the way, 28 points and 8 assists per game is absurd. Entering this season, it had only been done 16 times in the history of the league. 15 of the 16 resulted in All-Star nods with the exception being Tiny Archibald in his second season for a Royals team that finished 30-52. So there is some precedent here for what Young is doing offensively on a team that's anchored to the bottom of the standings. 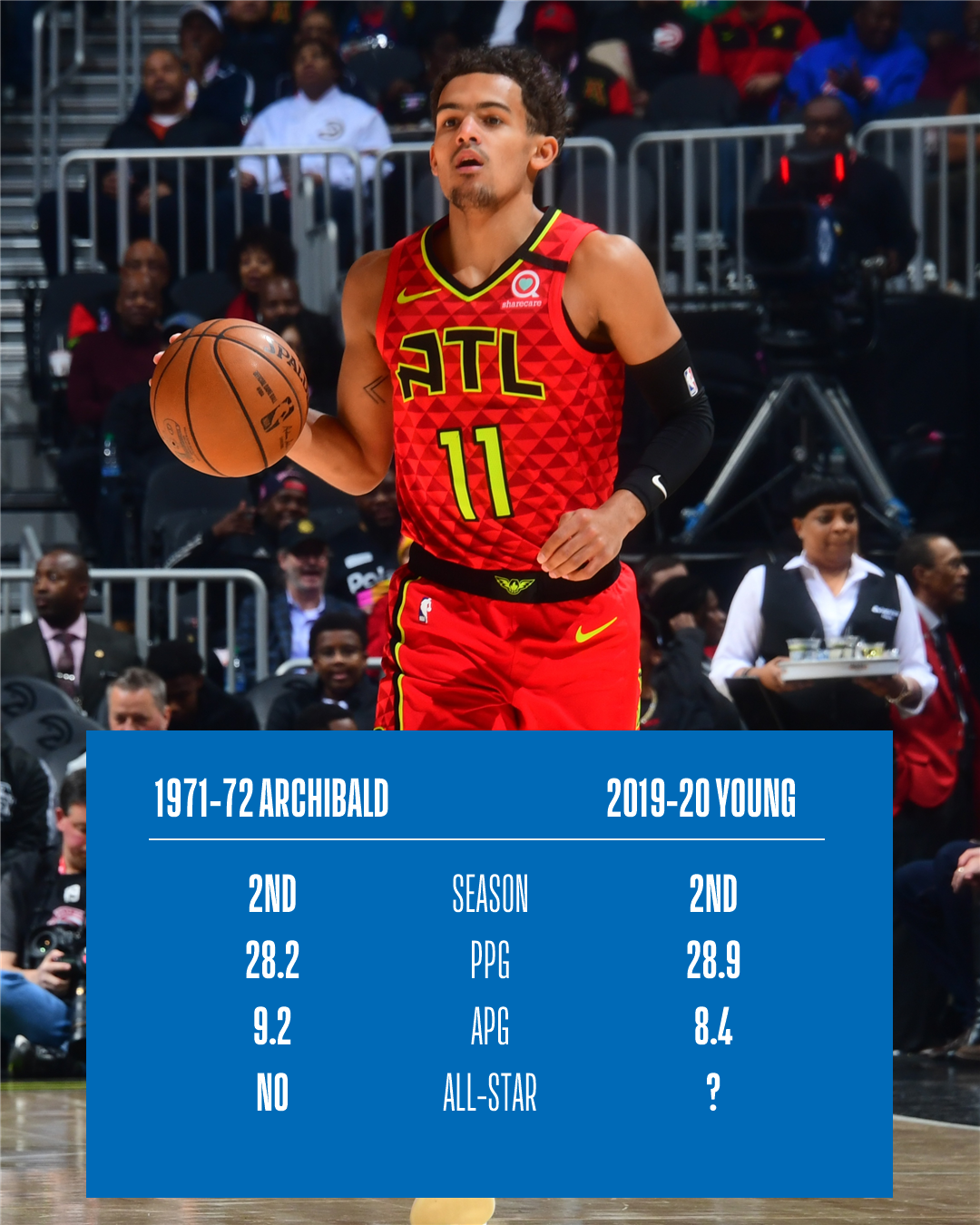 We also can't ignore the other end of the floor, right?

McGregor: I think we all viewed that Collins-Young duo as the two-headed monster that would really lead the charge for them being a playoff threat. Once Collins went out, I do think the team lost its sense of identity and ultimately, lost its way. It's a very young team (no pun intended) and we had pretty lofty expectations of a roster that relied on a number of first and second-year players to begin with. It also doesn't help that it doesn't have a true back up point guard.

As far as the defence… yeah that would probably be the one glaring weakness, so to speak.

Adams: The defence is hard to ignore.

McGregor: But, with such a hefty load on the offensive end. What are we really expecting from a guy who wasn't ever really known for that?

Adams: I want him to not be the worst defensive player in the league.

Adams: He's that team's leader, right? Atlanta quite literally goes from one of the worst defensive teams in NBA history with him on the floor to one that would hover around the top 5 this season based on whether or not he's out there. That should matter.

To me, the winning and - to a lesser extent - the D for someone like Young is about extremes. If the Hawks were five games under .500 or Young was just a mediocre defensive player, it would be one thing. But that's not the case here.

And this to be brings up the larger point about where to draw that line with winning acting as a tiebreaker.

MORE: Who should start the All-Star Game?

McGregor: That was going to be my follow-up question.

Spin back to the fan returns where Young finished first. Behind him were Kyrie Irving, Kemba Walker, Derrick Rose, Zach LaVine, Kyle Lowry, Jaylen Brown, Ben Simmons, Beal and Fred VanVleet… Last year, six guards from the East were selected to the All-Star Game. Assuming that's the case again this year, are there really six guards with more compelling cases than Young?

Adams: It gets thin pretty quickly.

There are a couple of narratives at play and I'm not sure why they are viewed independent of Young. For arguments sake, let's assume that Young ultimately doesn't make it as a starter despite the fan vote. It's basically what happened to Luka Doncic last year. In which case Young is vying for one of the seven reserve spots (only two of which must be guards).

Should the Bucks get a second All-Star? Yes, Middleton should be there before Young.

Should Boston's second All-Star be Jaylen Brown or Jayson Tatum? How about both... why does it have to be one or the other?

Ditto for Indiana and the discussion about Malcolm Brogdon or Domantas Sabonis. In my opinion, both should be there before Trae Young.

What do we do about Brooklyn with Spencer Dinwiddie and Kyrie Irving?

Now, I'm not a "winning trumps all" guy. When the Hawks sent four All-Stars back in 2015 because they had the best record, there wasn't a glaring snub. The only Eastern Conference player to average over 20 was DeMar DeRozan who had essentally missed half the season up until that point. There weren't other deserving guys.

While it does get thin, there are others I'd take ahead of Young.

McGregor: If he doesn't ultimately get in as a starter, it will definitely get interesting, although I think he'll get the benefit of the doubt from other players. It'll also be interesting to see where Kyrie lands considering his time missed. Brogdon, too, to a much lesser extent.

We'll have to agree to disagree, here, and wait and see where the chips fall for Young.

That leads me to ask about the other side of things. We briefly talked about Booker, Ingram and Towns. How do you see things falling in the Western Conference? It's been a bit of a strange year over there.

Adams: I think Towns will get in because of just how dominant he looked early though his injury which caused him to miss 14 straight games and counting has left the door open.

Booker and Ingram are interesting. Fairly similar cases and statistical profiles for teams hovering at right around the same spot. I think it's one or the other, but not both.

Did you know that in all of NBA history, there has NEVER been a season that had three different players average 25 PPG and not make the All-Star team? I do think there's something to be said where numbers have become so inflated that more guys on paper simply look like All-Stars.

McGregor: Would have never guessed that. It's definitely an interesting look at where the game has grown, how and why. Thinking about the numbers and the "empty stats" arguments that arise surrounding what does and doesn't translate into wins. That's what make those three so interesting.

The strange year in the West means that each of the Wolves, Suns and Pelicans have very realistic shots at making the playoffs and they'll all most likely be under-.500 come February. Two of those three making it seems fair. I think the Wolves have been bad because Towns is out while the Suns and Pelicans would probably be 20+ games below-.500 if it weren't for Booker and Ingram.

Adams: By the way, Chris Paul might single-handedly be the poster child for why winning trumps scoring when it comes to making the All-Star team.

MORE: CP3 and SGA are a match made in backcourt heaven

McGregor: I'm 100% with you on CP3. His impact this season goes well beyond the averages. And as far as the numbers, clutch-time statistics would say he's the league's best player down the stretch.

What we've seen from him in Year 15 is very worthy of the nod.

Adams: If it's not going to be a 100% fan vote (that's another discussion), I also like the view the All-Star team as a reward of sorts. It's recognizing not just individual growth, but one's ability to transform a team and over-achieve.

CP3 has transformed and overdeliverd in OKC. Ingram has gotten significantly better in an expanded role. And the Pelicans have been as banged up as anyone and like you said, othat team would probably be 20+ games below .500 if not for him.

Booker... is he THAT much better than a year ago? He's shooting the absolute lights out, but like Young, the same questions remain:

I don't think Booker should be "rewarded" for largely comng back as the same player or at the very least, delivering similar results. He wasn't an All-Star last season, he hasn't done much to quell the doubts about how the two biggest holes in his game, and thus, I don't think he should make it.

Maybe that's harsh, but making the All-Star team - especially in the West - is never easy.

McGregor: I agree on the All-Star team being a reward. I'm just torn on just how much I want to see team success factored in because I see that being what All-NBA nods at the end of the year are for. If a guy is having a historically outstanding individual season, he deserves strong consideration, at the very least.

And from a pure fan perspective, I want to see guys who are fun to watch take the floor during the main event on Sunday. Luckily, all of the guys we talked about fit the bill.

I say Trae's in, you say he's out
Karl-Anthony Towns is in
CP3 is in
Brandon Ingram is in

It looks like D-Book is the odd man out.