The NBA's never been in safer hands with a host of young stars already taking the league by storm. But how do they stack up against each other?

Between the office group chat arguments and hard campaigning for our favourite players, the NBA.com team has settled on our 23 best players under 23 years of age (as of opening night of the season). This isn't about who's going to have the best career or who is the most skilled, just straight up, 'who are the best players right now?'

Introducing the panel (So you can light up our mentions if you disagree):

Let's dive on in:

Last but certainly not least on this list, Carter Jr. may very well end up being the most important player on the Bulls' roster by the end of the season. The Bulls weren't a good team defensively last season and Carter Jr. doesn't only have the tools to defend well, but he wants to defend well. It may take him time to adjust to the speed and physicality of the league but by January we'll be seeing progress and by the start of next season, he won't be the last name on this list. (Carlan Gay)

For just a glimpse at how special Jackson can be, you can refer back to his first-ever Summer League game in which the 6-foot-11 forward scored 29 points while knocking down 8-of-13 three-point attempts - and his shooting isn't even what he's known for. Jackson, the 2018 Big 10 Defensive Player of the Year, was selected No. 4 based on his rim protection and potential. In the intangibles of being long, athletic and rangy, Jackson has an outstanding feel for the game and will learn the ins and outs of being a pro from former All-Stars Mike Conley Jr. and Marc Gasol. (Gilbert McGregor)

Rule out the final game of the pre-season where Ayton only played 15 minutes and across the opening four contests his numbers were absurd!

In a little under 30 minutes of gameplay, his averages were 20.5 points, 11.5 rebounds and 2.5 blocks per game. Yes, it may only be pre-season, but those numbers show Ayton is primed to lead the Suns back into relevance. (James McKern)

MORE: The good, the bad and the ugly from Kawhi Leonard's preseason with the Toronto Raptors

Based purely off talent, Fultz should be higher on this list. Based off output, he's in the exact right spot. Fultz holds the keys to help unlock the 76ers and their hopes of taking over the Eastern Conference with his role in the backcourt alongside Ben Simmons. He'll show this season why he was taken with the top overall pick and end up much, much higher on this list. (JM)

Sabonis' game has already changed a lot since entering the NBA. Whereas he was used primarily as a stretch four as a rookie in Oklahoma City, the Lithuanian showed off a more well-rounded game as a sophomore in Indiana. Expect more of the latter this season as the Pacers look to establish themselves as contenders in the Eastern Conference. (Scott Rafferty)

A lot of people are excited to watch the Hawks to see Trae Young, but John Collins may end up stealing all the headlines in 2018/19. His pick-and-roll game and energy around the rim are exceptional for a 21-year-old and now he is slowly developing into a shooter.

If he can continue to knock down three-pointers, Collins and Young could become one of the league's most scintillating young duos in the league. (Benyam Kidane)

I'm not sure there's a single player in the league that Toronto would rather have for Anunoby to study up close than newest teammate Kawhi Leonard. Like Leonard, Anunoby showed enough defensive ability as a rookie to earn significant minutes despite relative shortcomings on the offensive end. If Anunoby progresses on the other end, like a young Leonard several seasons ago, he could blossom into the type of high-level two-way wing that every team craves. (Micah Adams)

Drafted with the No. 3 overall pick, the Dallas Mavericks may have won the lottery with this 19-year old Slovenian superstar. Doncic enters the NBA with a stronger resume than most rookies, already earning multiple MVPs and championships in professional leagues overseas. Competing against Europe's top competition since he was 16 years old, the transition to the NBA might be more seamless than most rookies, too. He's looked NBA-ready through his first four preseason games and he's the highest-ranked rookie on this list. The sky is the limit on Doncic's potential and it will be fun to watch him grow throughout this season. (Kyle Irving)

Dennis Smith Jr. quietly had a solid rookie season with the Mavericks a season ago averaging 15.2 points, 5.2 assists per game. Turnovers were a bit of an issue for the 21-year-old last season at 2.8 a game, but a year older and wiser he should be able to cut down on those mistakes. Add in the fact he'll have more time off the ball with the arrival of Luka Doncic and the sophomore jinx might just fly by the bouncy point guard. (CG)

Despite dealing with extremely high pressure and expectations as a rookie, Ball found a way to deliver. The Lakers' point guard averaged 10.2 points, 7.2 assists, and 6.9 assists over 50 games and recorded two triple-doubles at just 20 years old. Defensively, Ball has proven to be adept at jumping passing lanes and disrupting the other team's offence. Now, playing alongside LeBron James, Ball's improvement will be expedited as he is a key piece in LA's future. (GM).

Russell has the keys to the Nets finally and this season he already looks way more aggressive attacking his defender off the dribble. He has the patience to create his own shot, drive to the hoop or step back and hit the three.

The 22-year-old has fantastic vision and is growing into his own as a playmaker and scoring option. Consistency is his only enemy here, but with the starting job all his, Russell looks set to take the leap this season. (BK)

The speedy Kings guard is a blur with the ball in hand and will be given the keys to the offence once again this season.

In season number two, Fox will figure out his speed isn't the be all and end all as he begins to pick apart defensive structures and get to his spots. He'll form a lethal one-two combo with Marvin Bagley that will unlock further facets to his game. (JM)

MORE: Rookie rankings entering the 2018/19 NBA regular season - Who comes out on top?

We're unlikely to see Murray this season after he tore his ACL in pre-season, but that doesn't impact his standings on this list. He's already one of the best defenders in the league and he has the potential to develop into an all-around threat on offence. If he does continue to trend in the right direction offensively, we're looking at a star in the making. (SR)

If you're looking for a big man in today's NBA, Lauri Markkanen ticks a lot of boxes. The 21-year-old's game is super smooth, from his shooting stroke to his ability to create space and finish around the rim...he's a true inside-out threat.

Markkanen became the fastest rookie ever to make 100 three-pointers last season, (shooting 38.9%) and now with an interior running mate in Wendell Carter Jr., expect the Finnish maestro to be able to create a lot more scoring chances. (BK)

Fresh off inking a new four-year extension with the Pacers on the eve of his fourth season, Turner can now turn his attention towards blossoming into the second All-Star that Indiana so desperately needs. Though he didn't take the offensive leap many expected last season, Turner has extended his range to the three-point line and at times shows signs of developing into the prototypical modern two-way big. (MA)

Ingram's rookie season didn't exactly live up to the No. 2 pick the Los Angeles Lakers selected him with, but he still earned All-Rookie Second Team honours. His second season in the league was much more along the lines of his expectations, improving in every major statistical category, most notably his shooting percentages and points per game.

The 21-year old led the Lakers in scoring last year and getting buckets will only become easier playing alongside LeBron James for the next four years. Ingram comes in at eight on this list but his future is as bright as anyone ranked ahead of, or behind him. (KI)

If the Nuggets are going to take the next step and make the playoffs this season it's going to be because of Murray. We know what we'll get from Nikola Jokić on a nightly basis and Paul Millsap will certainly help move things in the right direction, but Murray taking the next step brings post-season basketball back to the Mile-high city. (CG)

Considering the depth of Boston's roster, it's the efficiency of Jaylen Brown's game that stands out. When he gets his chances, he takes them and we saw that in the playoffs as he scored 18 points per game, shooting 39% from three.

His versatility allows him to play and defend multiple positions and as his role continues to expand, we will including him in the 'who's the best two way player in the league?' arguments. (BK)

Of the four players above him on this list, only Jayson Tatum is younger. Which is wild when you consider this is his fourth season in the league.

Booker topped 40 points three times last season and let's not forget about his 70 point outburst in year two. He is arguably the best shooter of the top five and has another season of eligibility on this list. (JM)

While Ben Simmons and Donovan Mitchell stole the headlines during the season, it was Tatum who delivered when it mattered most, in the playoffs.

With a full-strength Celtics roster, he may lose a bit of his usage, but he may also not have the number one defender up against him. After training with Kobe in the offseason don't be surprised to see him continue his stellar rise. (JM) 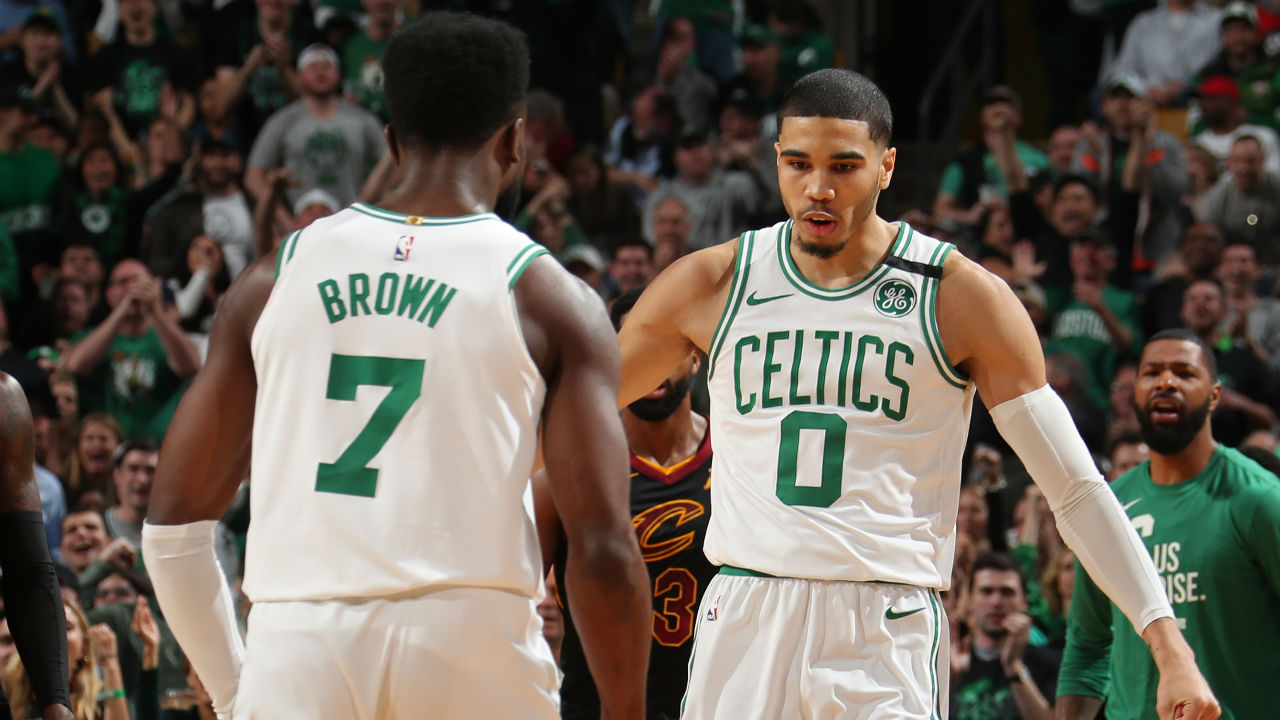 What can we say about Mitchell that hasn't already been said? The No. 13 pick in the 2018 NBA Draft didn't stop improving during his rookie season and he outplayed a pair of All-Stars in their primes in Russell Westbrook and Paul George in the opening round of the playoffs. Entering his sophomore season, Mitchell is now the man on a team many are expecting to finish near the top of the Western Conference standings. (SR)

By the end of this season, I think Simmons could well be the best player on this list, after he averages a triple-double and makes the All-Star team ¯\_(ツ)_/¯ . That sounds crazy, but the reigning Rookie of the Year looks set to take another big leap in Year 2 and putting up those type of numbers isn't necessarily that far-fetched.

We marvel at his playmaking and offensive creativity, but Simmons is quietly becoming one of the best defenders at his position, utilizing his size, speed and strength. Last season he was eighth in the NBA in defensive rating, with Dejounte Murray the only point guard above him.

The Aussie is a two-way star in the making. (BK)

The numbers paint the portrait of a historically great, Hall of Fame calibre player. Through three seasons, he's been every bit as productive as Hakeem Olajuwon, Tim Duncan, David Robinson and Alonzo Mourning at the same point in their careers while also starting in all 82 games each season. So while there are some valid concerns over his defence and underwhelming post-season debut, Towns is pound-for-pound the most productive young player in the game. (MA)

"The views on this page do not necessarily reflect the views of the NBA or its clubs."