In 1995, Nav Bhatia attended his first Raptors game. The franchise was brand new, without any established traditions, without any star players and without any hope of winning big.

That initial attraction was just a love for the game - nothing more.

For Bhatia, it was more than enough. 24 years later, he's never missed a game and along the way has, almost accidentally, become friends with NBA superstars, corporate CEOs and internationally-known musical artists by simply being himself: a hard worker with an NBA obsession.

The story of the NBA's most passionate superfan is a tale rooted in self-discovery, one built on working hard, breaking barriers and changing perceptions.

Nav Bhatia was born and raised in Delhi. His father - who ran an optical business - wanted him to become a doctor which led to Bhatia's pre-medical studies at DAV College Jalandhar. But medicine proved not to be his calling.

After moving to the United States in the early 1970s to pursue a degree in mechanical engineering, he stayed in California for several years working alongside his brother. Bhatia owned and operated a theatre and also ran several restaurants before eventually moving back to Delhi with an eye towards expanding the family business. Those plans changed during the anti-Sikh riots in 1984 when conditions became too dangerous, forcing Bhatia to leave India.

He settled in Canada and, upon arrival, looked for engineering work everywhere, applying to hundreds of jobs with no luck. Nobody wanted to hire a Sikh with a turban and beard.

Months went by until finally, a Hyundai dealership took a chance on Bhatia and hired him as a car salesman. In the face of disparaging behaviour from co-workers and customers alike, Bhatia was determined to prove that hard work trumps hate and in his first three months sold a record 127 cars.

He never looked back.

In the coming years, Bhatia was recruited to become general manager of a different dealer and turn around a business nearing bankruptcy. Upon getting the gig at Mississauga Hyundai, all but one of the employees quit, refusing to work for a Sikh. He persevered and with an almost entirely new staff, transformed it into one of the top dealers in all of Canada.

His tremendous success enabled him to eventually purchase not only that dealer but also the original one that granted him his first opportunity in 1984. Now as the owner of two successful car dealerships, Bhatia's self-made fortune gives him the means to fully invest in the thing he cares for more than anything: The Toronto Raptors.

From 1995 to 1998, Bhatia cheered at every game from start to finish - no matter the score, no matter the opponent. Toronto may have been the worst team in the Eastern Conference over that span, but you'd never know watching the self-made Sikh clap and shout from his courtside seats.

Former Raptors general manager and Hall of Famer Isiah Thomas took notice and in 1998, called Bhatia out to centre court and bestowed upon him the official title of Superfan. A short while after this, a life-changing moment happened at a local phone repair store.

A man noticed Bhatia enter the store, said goodbye to his wife on the phone and hung up. Awaiting a taxi cab, the man assumed Bhatia to be his driver. Though many fellow Sikhs in Toronto made a living by driving - a fact that Bhatia is proud of - he wanted those who look like him to be viewed not just as cab drivers but also doctors, lawyers and businessmen. That perception and assumed identity struck a chord.

It was that moment Bhatia decided that something needed to be done to change the perception of Sikhs. He called the Raptors and later that year, with help from the team, organized the first game day celebration of Baisakhi Day. He purchased tickets for 3,000 South Asian kids to attend the April 12 game against the Pacers which featured a Bhangra halftime performance.

Since then, the events have become a tradition, with Bhatia routinely spending several hundred thousand dollars annually to bring together young basketball fans from all cultures and immerse them in the basketball community. These types of continued efforts led to the bestowment of another title in 2013 as Bhatia was named Raptors Ambassador for South Asians.

Though he may be a Raptors Superfan, the outreach is not limited to Toronto. Bhatia has put on similar events such as selling out a movie theatre for an NBA watch party.

In addition to his work in bringing communities closer to the game of basketball itself, he's also an ambassador for the Daughters of India initiative through World Vision, a partnership that came to be thanks to his affiliation with the Raptors and Punjabi background.

Through this project, Bhatia has pledged to raise $200,000 dollars that will result in the completion of 60 washrooms for girls in 20 different schools in the Faridkot district of Punjab. Bhatia's main focus in this particular instance is helping curb the issue of lack of access to proper and secure washrooms for young girls, a common roadblock for those seeking continued education.

There was a time when his Raptors super fandom meant simply going to games and enjoying the spectacle of sport. But we've reached the point where his love of the game reaches so far beyond anything that happens on the hardwood.

Spend any time at all with Bhatia and it's readily apparent that his primary motivation in being so visibly active is to simply make the world a better place while changing the way his people are viewed by others.

"I always say give me anybody in the world. I'll take them to a game. Doesn't matter what colour, creed, race or gender they are, give me 48 minutes at the game with them. And their views about the Sikhs are going to change forever." - Bhatia in his 2014 Ted Talk 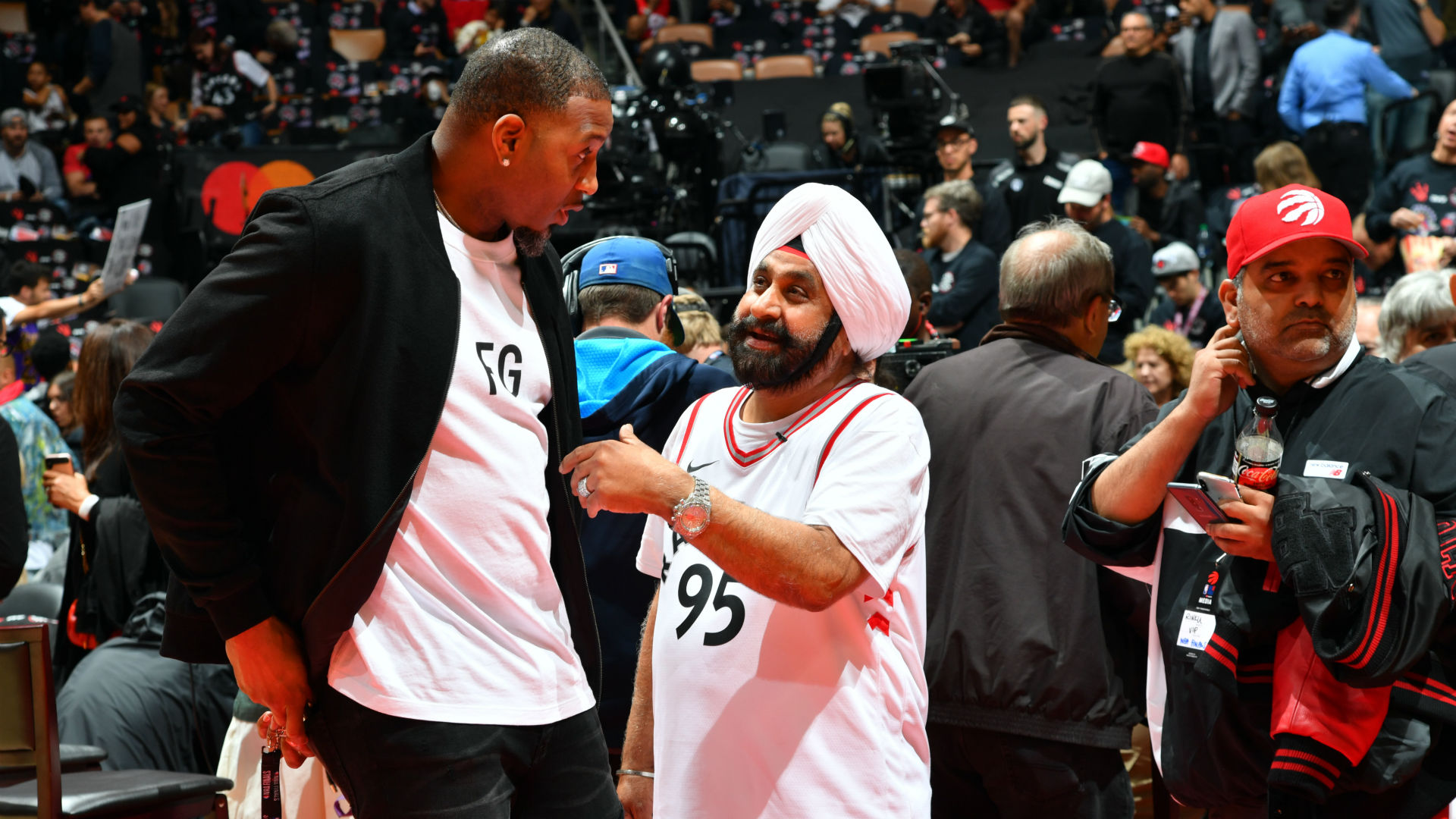 From start to finish

It's nearing tip time and Nav Bhatia has a problem.

Sitting in bumper-to-bumper traffic, Bhatia is on his way to a game. And by the looks of it, he's going to be late. Behind the wheel and desperate to make the opening tip, he maneuvers the car onto the shoulder of the road and circumvents the seemingly endless line of cars locked in gridlock.

He knows he shouldn't do it, but what's the alternative? Surely, he couldn't be late.

Feverishly checking the time, the sounds of the pre-game atmosphere he knows all too well are almost within earshot: the squeaks of sneakers, the pounding of balls, the rattling of rims, the ringing of air-horns.

And then he notices the lights. A kaleidoscope of red and blue races up in his rear-view mirror, forcing Bhatia to step on the brakes. A deep sigh leads to shrunken shoulders, the look of a man resigned to his seemingly sealed fate: he wouldn't make it.

The police officer calmly approaches the car, takes one look down and says "Oh! Aren't you Nav Bhatia, the superfan? Don't do it again, I'm going to let you go today."

To this day, Nav Bhatia has still never been late to a Raptors game.

EDITOR NOTE: This story was originally published in October 2018. It has been lightly edited to reflect the 2018-19 NBA season.