The year's shortest month has come and gone as we are now entering the final two months of the 2019-20 NBA season.

Before we shift focus to the season's stretch run, let's take a look back to the month of February, when Canadian talent was on full display from start to finish. Of course, February was highlighted by All-Star Weekend in Chicago, where Canada was well-represented by four of its brightest young stars.

While we wrapped up the month of January by acknowledging their selections, we begin our February review by taking a look at just how bright they shined on one of the league's biggest stages.

Yes, the future of basketball in Canada is bright.

But the present is awfully bright, too. 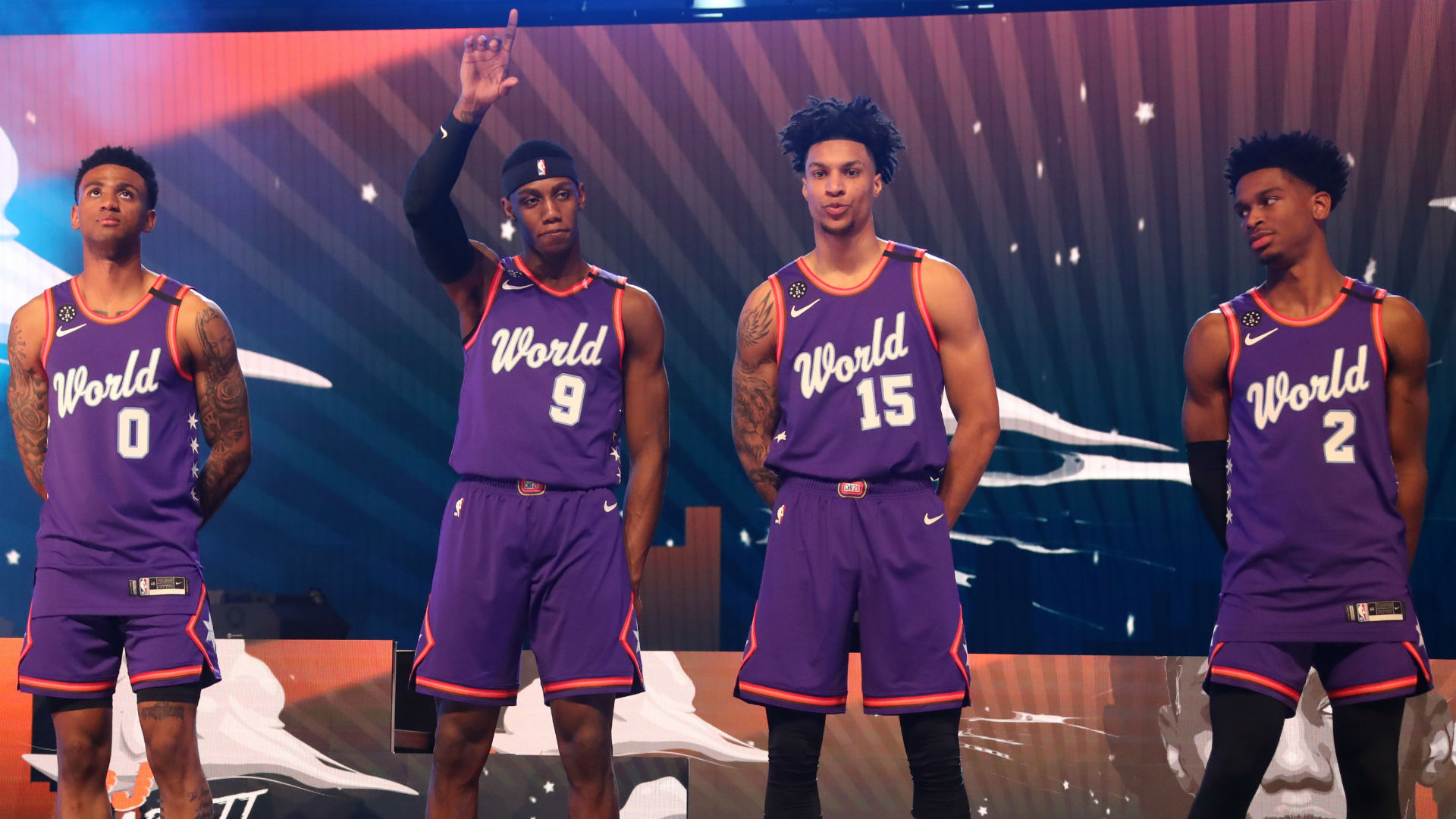 In the Rising Stars Challenge, Canadians Nickeil Alexander-Walker, RJ Barrett, Brandon Clarke and Shai Gilgeous-Alexander combined to score 71 of Team World's 131 points, with Barrett scoring a game-high 27 points (on 11-17 FG) in under 24 minutes of action. The game's third-leading scorer? Clarke, with 22 points (on 11-15 FG) in the same amount of time.

Leading up to the game, much was made of the Canadian representation and in turn, each of the four players on hand were asked about the opportunity and what it meant.

Clarke, the Grizzlies' 23-year-old rookie standout, told reporters that (it's) very, very special. It's also really big for our country. So I'm just really grateful to play with them and represent our country because basketball is getting bigger and bigger there."

The evolution and growth of basketball is a point also made by Gilgeous-Alexander, who made mention of each of the four players being from different areas, saying: "It's super cool. Just cool to see how far Canada Basketball has come. And we're from all over. Myself being from Hamilton, Nickeil from Scarborough, RJ from Mississauga and Brandon from B.C., it's been super cool."

The four Canadians were led by Toronto Raptors top assistant coach Adrian Griffin, someone who has become familiar with the amount of talent north of the border. Joining Griffin on the bench was Raps assistant and Toronto native Jamaal Magloire, who, after being drafted in 2000, did his part in paving the way for the next generation of Canadians as he proudly represented as an All-Star in 2004.

Showcases like these serve as a reminder that it's only a matter of time before we see a member of this next generation of Canadian stars representing on Sunday during the weekend's main event.

Wiggins is a Warrior

The February trade deadline saw 2014 No. 1 overall pick Andrew Wiggins land with Golden State Warriors, a fresh start for a young talent with much more to prove.

In the first eight games with his new team, Wiggins has posted averages of 19.9 points, 4.3 rebounds and 3.0 assists, earning the praise of his new teammate, Stephen Curry:

Steph Curry on Andrew Wiggins: "He's a walking 20 points. The intangibles he can bring, cutting, length on defense, all those things will be a fun process to build that chemistry. This is a 15-month journey to spring next year."

As well as his new head coach, Steve Kerr:

"Now that I've seen him play, people have focused on everything Andrew can't do and have forgotten all the things that he can do... people have said that he's overrated so much that he's become underrated." pic.twitter.com/6iJqJ34epw

The 15-month timeline that Curry mentioned is worth keeping an eye on, as Wiggins will likely be a key piece in Golden State's future, as it looks to bounce back from a rough 2019-20 season. With Curry and Klay Thompson back in the lineup, Wiggins, a "walking 20 points" as a potential third option on offence is a scary prospect for other Western Conference teams.

There isn't much of a better place for Wiggins to show and prove than in The Bay, and he appears to be up for the task.

In addition to his appearance in the Rising Stars Challenge, Gilgeous-Alexander took part in the Taco Bell Skills Challenge on All-Star Saturday Night. As the leading scorer for one of the West's hottest teams in the Oklahoma City Thunder, the discussion surrounding the 21-year-old hasn't just been limited to All-Star Weekend.

This past month, SGA scored 20 or more points six times, recorded three double-doubles and flirted with a triple-double in a statement win over the Denver Nuggets. He finished the month of February averaging 18.7 points, 6.5 rebounds and 3.8 assists for a Thunder team that has its sights set on one of the West's top four seeds after cementing itself as a playoff squad.

Let's not forget that Gilgeous-Alexander's isn't the only Canadian in Oklahoma.

Luguentz Dort (Montreal, QC) has established a role as a starter with the Thunder despite still being on a two-way contract and, as a result, rarely practicing, according to The Oklahoman .

Dort impressed with 15 points (on 6-for-6 shooting) in an OKC win over the San Antonio Spurs, combining with Gilgeous-Alexander to score 37 points on 70.0% shooting.

OKC can still convert Dort's contract into a standard deal ahead of the playoffs, meaning he'll get to practice and, more importantly, can continue to start alongside Gilgeous-Alexander on the postseason stage.

There's no denying that Jamal Murray is one of the biggest x-factors for the Denver Nuggets, a team that's poised to make a deep run this year after coming up short in the 2019 Western Conference Semifinals.

No Canadian scored more points per game in February than Murray, who helped lead Denver to six wins in the month with averages of 23.6 points, 5.7 assists and 3.1 rebounds per game on 53.9% shooting from the field and 40.7% shooting from deep.

How exactly is he the Nuggets' x-factor? There's a direct correlation between his production - and aggression - and team success.

Through February, Denver is 21-4 when Murray attempts six or more 3-pointers, with four of the 21 wins coming over the Raptors, Lakers, Celtics and Rockets.

Murray turned 23 in the month of February, meaning the best is yet to come. Don't be surprised if he's the next Canadian to make a leap into becoming an All-Star.

Until then, expect him to make his presence felt in the 2020 playoffs.

As you can see, February was a big month for both Murray and Wiggins. Not only did the duo each lead all Canadians in two different statistical categories, but they both also celebrated birthdays on Feb. 23.

Thompson, Canada's rebounds leader for the month and the season, also continued his career-best scoring season with three double-doubles in February, including a monster 27-point, 11-rebound stat line in a dominant win over the Atlanta Hawks heading into All-Star Weekend.

In total, 18 Canadians saw NBA action during the month of February, with Mychal Mulder (Windsor, ON) making his NBA debut as a member of the Warriors.

After standing out with the G League's Sioux Falls Skyforce, Mulder signed a 10-Day contract with Golden State, earning his first opportunity to showcase his talent on the NBA stage. In just his second NBA game, Mulder scored 14 points and grabbed six rebounds in a Feb. 29 win over the Phoenix Suns.

Mulder continues the trend of Canadians that have proven that they belong at the NBA level, and the next might not be too far behind.