Every move the Philadelphia 76ers made this summer has turned 2019-20 into a crucial season for Ben Simmons. As two of the East's perceived top contenders took steps back via free agent departures, the Sixers pushed in their chips for a title run and, in doing so, put more pressure on Simmons' shoulders than ever before.

Simmons made strides last season but the All-Star nod may have obscured what was essentially a statistical stagnation from year one to year two. Any title hopes rest on him making an even bigger jump in year three and, in signing him to a $170 million max extension, the Sixers clearly believe Simmons is capable of that improvement.

MORE: What's next for Simmons after signing max extension?

That said, there are multiple ways you could view Philadelphia's summer in relation to Simmons - either they fully believe he's prepared to be the main creator on a title team or they aren't sure, but circumstances require they force his hand. He may not be ready for the role and expectations he's going to be saddled with this season, but Philadelphia's self-imposed timetable require they know that answer either way.

Even if the Sixers are unsure right now, that's not necessarily a bad thing. They wouldn't have made those moves this summer if there wasn't a plausible chance Simmons could help lead them to a title. He has the ability to fully live up to the challenges set before him but this improvement won't be simple.

Any remaining training wheels Simmons may have had in year two are now removed. JJ Redick and Jimmy Butler are both gone and have been essentially replaced by Josh Richardson and Al Horford. Both are very good players but neither are perfectly suited to Simmons' game the way Redick was nor will they ease his offensive burden quite as Butler did.

OFFSEASON GRADES: Did the Sixers improve?

Richardson is certainly a starting-calibre wing but pencilling him in as a pure replacement for Butler is expecting too much. That comparison might make sense from a physical perspective, but Richardson will be far more of a complementary piece than the far more dynamic Butler.

Richardson has proven to be a good shooter and scorer at the NBA level. He's also a solid team defender who can match-up with both guard positions which is key as, even at 6-foot-6, he will often be the shortest Sixer on the court. What makes Butler so special, though, is his playmaking ability on both sides of the ball.

When things got tough in the playoffs against the Nets, and then significantly more so against the Raptors, Butler asserted himself as the clear focal point of the Sixer offence. His usage peaked in the fourth quarter of playoff games at 27.5 percent, notably higher than both his usage in the regular season (21.8 percent) and playoffs overall (22.7 percent).

In Richardson's three career playoff series, he has just one game with 15 points and one other with at least five assists. Butler has totalled 15 points and five assists in the same playoff game 14 times, including five times in the 2019 playoffs alone.

Richardson should really help the Sixers this season, but he's not Jimmy Butler. The onus will be on Simmons' shoulders not only to replace the lost production but also the late game leadership that Butler provided.

The addition of Horford does compliment Simmons' game in some ways but the move isn't a perfect fit. Playing Horford and Embiid together will only do more to congest the paint and it removes a potential ball-handler from the wing, which pushes Simmons into an even larger offensive role.

Horford has become a reliable shooter but he's certainly not a player who can replace Redick's floor-stretching presence. More importantly, starting both Horford and Embiid pushes Tobias Harris up to the three and, while that is a position he has played in the past, the move has potential to create some issues for the other starters. 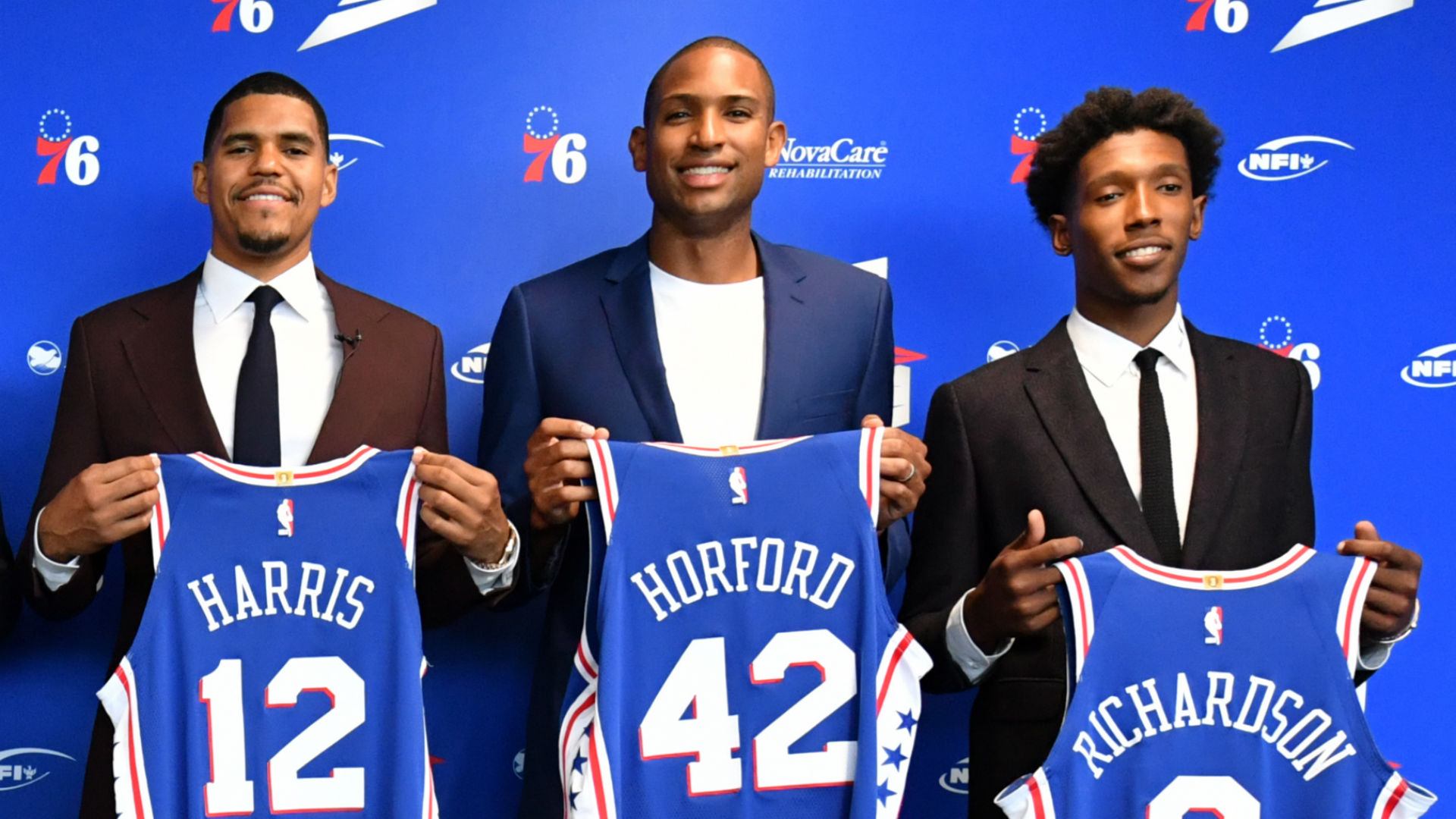 Harris is a comfortably above-average shooter for a power forward but he hasn't quite earned his reputation as an elite shooter. He had an outstanding couple of half-seasons in Los Angeles but he has made just 34.5 percent of his threes in his other 339 games. Once he became a Sixer, he shot just 32.6 percent in the regular season and 34.9 percent in the playoffs.

The offence desperately needed more shooting last season and this year's roster is only going to be even more congested. They lost their two best shooters - three if you include Landry Shamet - and have replaced them good players, but inferior shooting options.

Simmons' shooting progression is a well-established odyssey but he needs players around him who can space the floor in order to open up the interior of the defence. Mike Scott should help off the bench but teams are going to pack the paint to try to slow down Simmons and Embiid while daring Richardson, Harris and Horford to try to beat them from deep.

MORE: How Simmons can improve as a scorer

The other domino of starting big is that the Sixers will likely play at a considerably slower pace. Philadelphia had the eighth-fastest pace last season but, when Simmons was on the court without Embiid, they played at what would have been the fastest pace in the league. Similarly, Boston played notably faster when Horford was on the bench .

Admittedly Simmons' minutes without Embiid were largely unsuccessful but they were when he appeared most in control of the offence. Brett Brown's plan is clearly for at least one of Embiid or Horford to be on the floor at all times this season, meaning those minutes when Simmons gets to play at hyperspeed are likely gone.

More than anything, this season will test Simmons' ability to adapt. He is one of the most unique players in the league but the Sixers are trying to develop him into something much more traditional while not compromising what makes him special.

That may be the best thing for him long term but it will undoubtedly create challenges that Simmons will have to overcome.