With the All-Star break in the rearview, the second half of the season is just days away as teams gear up for the run home.

At the midway point of the season, which teams have separated themselves as title contenders? Who's in the mix? And which teams could make some noise in the playoffs?

The rich just got richer.

Adding Blake Griffin to an already super-talented roster puts Brooklyn over the top as the favourite to come out of the East.

Defensively, they still have some way to go, but between the firepower of Kyrie Irving, James Harden, Kevin Durant and Joe Harris, opposing defences have already got their hands full every night.

While Griffin may not be the player he once was, he gives them some much-needed help in the frontcourt and can still be an effective player in what will be a reduced role, either as a small-ball five or with the bench unit.

They've got 35 games to figure out how the pieces fit when everyone's healthy, but this Nets team looks set for a trip to the NBA Finals.

They've been the best team in the league through the first half of the campaign, anchored by the NBA's fourth-ranked defence and a 'sharing is caring' ethos on offence.

With six players averaging in double figures, including the frontrunner for Sixth Man of the Year, in Jordan Clarkson, the Jazz are one of the most balanced teams in the league and have the easiest remaining schedule, per Tankathon.

The argument against them is the lack of a 'true superstar' who can be the difference-maker in playoff games, but in Donovan Mitchell, they have an All-Star guard who is looking increasingly comfortable in that role.

They'll likely be the #1 seed at the end of the regular season and with a 15-2 record at home this season, the Jazz are well on their way to making a deep playoff run.

Doc Rivers has got this 76ers team firing on all cylinders and is getting the best out of his most important players.

Joel Embiid is playing like an MVP, Ben Simmons a Defensive Player of the Year and Tobias Harris is having an ultra-efficient season, but most importantly their role players are stepping up. The likes of Seth Curry, Danny Green and Shake Milton are hitting shots and providing spacing for their key players to go to work.

They're currently top of the East, dominant on their home floor and hold a top-five defence, which makes them the best matchup for the high-powered Nets in the East.

The defending champs are walking wounded without star big man Anthony Davis and lost seven of their past 10 games heading into the All-Star break.

Not really. The Lakers are built for the postseason and if both LeBron James and Anthony Davis are healthy come the playoffs, they'll be in good stead to make it back-to-back titles.

The Clippers have flown under the radar this season, but have all the ingredients for a championship run after last season's disappointing second-round exit.

Kawhi Leonard is playing at his usual high level, but the difference-maker this season has been and will be Paul George.

He's healthy and looks back to his normal All-Star self, thriving as a playmaker, operating out of the pick-and-roll, averaging a career-high 5.4 assists per game.

With their two stars playing at an elite level on both ends of the floor, the Clippers are in a strong position to make a deep playoff run.

In the first half of the season, consistency eluded the Bucks, including a five-game losing streak in February, but the absence of Jrue Holiday can't be understated.

The two-way guard missed 10 games to health and safety protocols, (the Bucks went 5-5 in his absence) which means they are 17-9 when Holiday has played.

While they have limited roster flexibility, I expect them to be active at the trade deadline, with reports linking them to Nemanja Bjielica, P.J. Tucker among others, who can provide some added scoring and toughness for the run home.

From the surprising Suns, to the super clutch Blazers and the under-performing Celtics, Heat and Nuggets, these teams are just outside the top tier, but certainly have the talent to cause an upset in the playoffs.

The Suns have arguably been the biggest surprise of the first half of the season, sitting second in the Western Conference at the break, but can they keep it up for the rest of the season?

Led by Chris Paul and Devin Booker, plus the ever-improving Mikael Bridges and Deandre Ayton, this Suns team could find themselves with homecourt advantage in the playoffs. They may not be a title contender per se, but this is a team you have to take seriously.

After a slow start to the season, the Heat found some rhythm ahead of the break with impressive wins over the Jazz, Lakers and Raptors, but do they have what it takes to make another deep playoff run?

While the other teams at the top of the East - the Nets, Bucks, and 76ers - improved from last season, the Heat remain largely the same.

After their epic run to the 2020 NBA Finals, it's hard to discount them, but their path to repeating that effort has become a lot more difficult.

Injuries and COVID-related absences hit the Celtics hard through the first half of the season, especially the extended absences of Kemba Walker and Marcus Smart, but at the midway point of the season, they're 19-17 and sit fourth in the Eastern Conference, thanks largely to the play of All-Star duo Jayson Tatum and Jaylen Brown.

They're another team expected to be active at the trade deadline, given they possess a monster $28.5 million trade exception. While they might want to hold out for a big-name player, their bench is in need of some extra punch, currently sitting 25th in the NBA in bench scoring.

The Trail Blazers have exceeded expectations at this point, especially in the absence of key starters CJ McCollum and Jusuf Nurkic.

They've gotten some steady play from Carmelo Anthony, Gary Trent Jr. and Enes Kanter, but ultimately they will go as far as Damian Lillard takes them. Good thing they've had their clocks permanently set to DAME TIME. He's second only to Zach LaVine in clutch scoring with 104 points, coming on 63.3 percent shooting, time and time again lifting this team to wins, currently 21-14 on the season.

If they can get healthy, they're a team you want to avoid in the postseason.

I'm not quite ready to give up on the Denver Nuggets.

They started the season terribly and Jamal Murray took time to rediscover his form from the bubble, but despite their struggles, they're just 2.0 games back of the fourth-seed Clippers.

Thanks to Nikola Jokic making an MVP case of his own, averaging 27.1 points, 11.0 rebounds and 8.6 assists, they've done just enough to stay afloat and put themselves in position for a big second half of the season.

Teams poised to make some noise

While these teams aren't necessarily in the title hunt, you don't want to see these guys in the first round of the postseason.

Likely to finish in the bottom half of their respective conferences playoff seedings, the likes of the Luka Doncic's Mavericks and Steph Curry's Warriors are capable of anything led by their All-NBA stars. 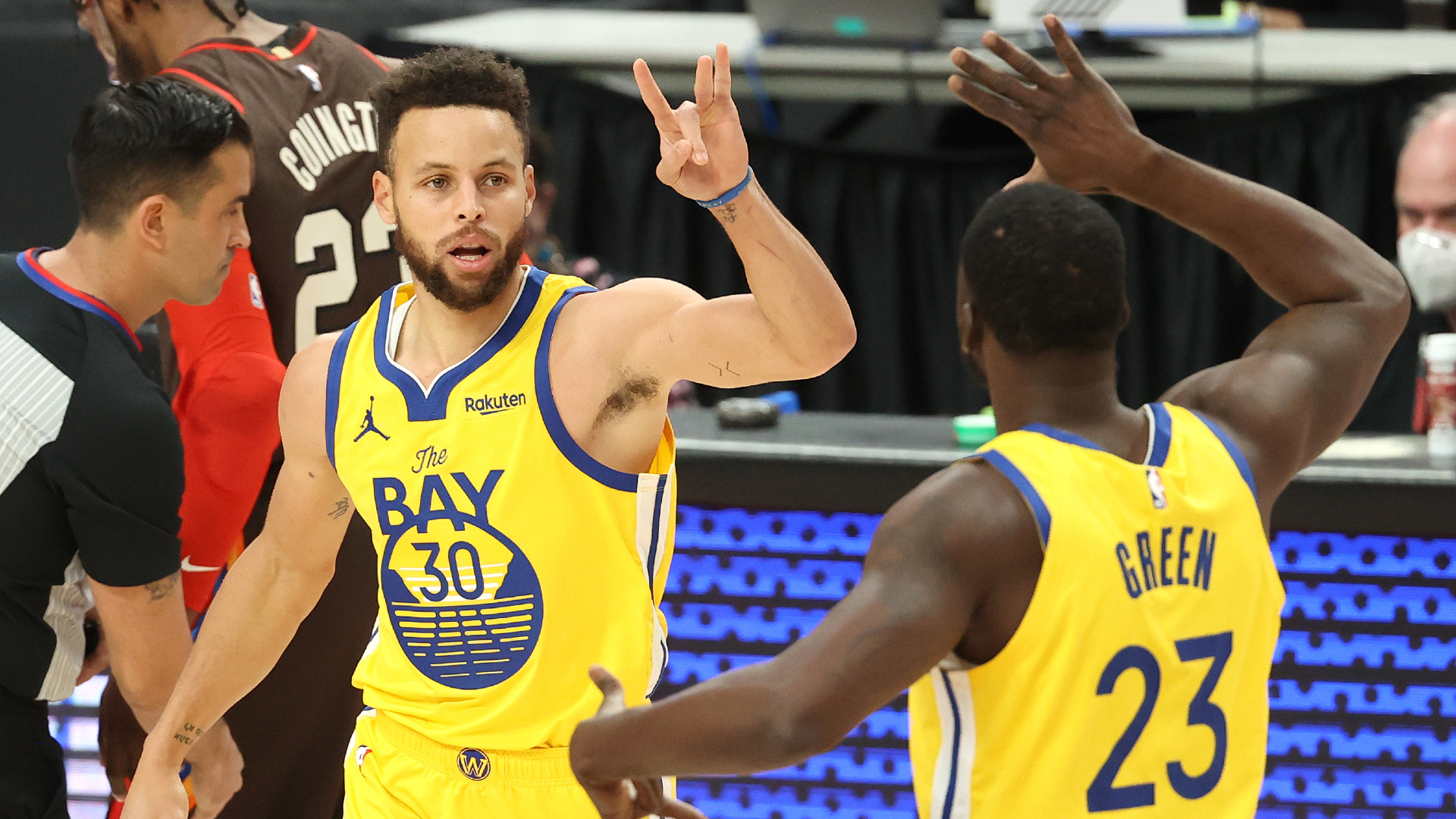 Sitting in the logjam at the bottom of the West playoff race, the Warriors could find themselves in a play-in situation for the postseason.

With Draymond Green back to his best and Steph Curry playing like an MVP candidate, the Warriors aren't what they used to be, but still have some of the key ingredients to make some noise in the playoffs.

Entering the 2021 season, the Mavs had some big expectations, largely placed on the shoulders of Luka Doncic, which so far they've failed to live up to.

A combination of injuries, acclimating a string of off-season additions and a tough first-half schedule has them sitting eighth in the West.

With the second-easiest schedule for the run home, the Mavericks, who went 8-2 in their last 10 games before the break, are a team capable of interrupting things in the West.

Doncic showed us that much last season in the first round against the Clippers.

Don't look now, but the Knicks are a top four team in the East.

If they can continue to build on their impressive first half of the season, led by first-time All-Star Julius Randle and their stingy defence, New York's toughness under Thom Thibodeau will make them an interesting matchup come playoff time.

Through the first half the season, the Hornets have shown they're not afraid to take the fight to the best teams, with their free-wheeling, up-and-down style making them must-watch TV.

Currently seventh in the East, behind LaMelo Ball's record-breaking rookie campaign and the re-emergence of Gordon Hayward, the Hornets are another team who could find themselves in a play-in situation for the postseason.

They've got nothing to lose as they try to make it back to the playoffs for the first time since 2016. Winning a first-round series is unlikely for this young team, but would you be surprised if they took a couple games off a highly-seeded team?

After their streak of 22-straight trips to the playoffs came to an end last season, the Spurs have impressed in 2021, despite a string of canceled games and injuries to key rotation players.

With a balanced mix of youth and experience, they're on track to return to the playoffs, but face a tough second-half schedule with 40 games in 68 days, including a league-high 11 back-to-backs.

The second half of the NBA schedule gets underway, Thursday, March 11 (E.T.).