The Miami Heat are heading back to the NBA Finals for the first time since 2014!

After a tight game through three quarters, the Heat dominated the fourth, outscoring the Celtics 37-27 to secure a 125-113 win.

Bam Adebayo turned in a huge performance to close out the series, with 32 points, 14 rebounds, and five assists, leading six Heat players in double figures.

If you missed any of the action, we've got you covered with all the highlights and stats below:

- Adebayo caps off his monster game with a dunk1 He came up huge for the Heat to close out the series, recording 32 points, 14 rebounds, and five assists, leading six Heat players in double figures.

- Adebayo's got the Het back in front with a string of big plays. He gets two quick buckets and finds Butler with the left hand wrap around dime (5:55)

Adebayo s the first Miami player with 30+ points and 10+ rebounds in a playoff game since LeBron James in 2014.

J.B. swipe and score... 20-6 @celtics run has them up 6 with 9 minutes left on ESPN!#NBAPlayoffs #WholeNewGame pic.twitter.com/qoiyw7KP5v

- Jaylen Brown throws it down! He's not happy with the lack of foul calls and is receiving medical attention on his left knee after his legs were taken out. He's staying in the game (11:09)

- Brown came up with a pair of big plays late in the period to steady the ship for Boston. He gets the offensive rebound and the putback and follows it up with an and-1 finish to cut the lead to two points (1:00)

- Iggy can't miss! Another triple goes down and the Celtics call timeout (4:20)

- Iguodala connects on another triple. The Celtics have to respect him from deep if he's going to keep letting it fly. He's got 11 points on 100% shooting (5:18)

- Make that four fouls on Kemba Walker. Theis has four for the Celtics as well. Walker heads to the bench, but Theis remains in the game (9:11)

- Marcus Smart is heating up. He's got a team-high 16 points

Marcus Smart (16 PTS) hangs and gets it to drop!@celtics 69@MiamiHEAT 74#NBAPlayoffs on ESPN pic.twitter.com/CfBmtth1q7

- After a slow start for both teams, the Heat take a two-point lead into the break. Adebayo leads the way for Miami with 16 points, while Butler has 13.

- Tatum came to life in the second period and has stuffed the stat sheet through two quarters. He's got 12 points, eight assists, six rebounds, and two steals. Smart has 12 points and Brown 10. 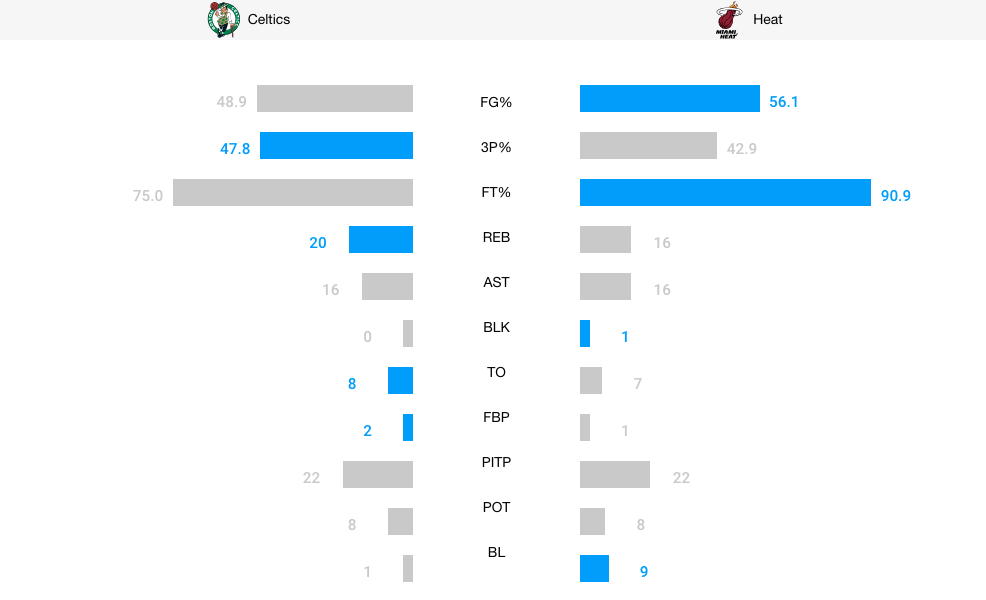 - Kemba Walker picks up his third foul and Dragic goes to the line (0.7)

- Miami's gone to their zone defence but the Celtics are moving the ball well and getting great looks inside and from beyond the arc. Theis' work as a screener is making things happen for Boston. The lead is just two points after Tatum gets the steal and slam (5:53)

- Butler gets free on the backdoor cut and gets his 13th point of the night. Timeout Celtics (7:09)

- Tatum gets his first bucket of the game, burying the 3-pointer. He's 1-of-8 from the field, but has six assists and four rebounds. Will we see another big second half from the All-Star? (8:29)

- Butler continues to be aggressive getting to the rim. He's got 11 points on 5-for-7 shooting. The Heat are shooting 56% from the field early in the second (9:55)

- Dragic follows it up with another triple and after missing their first four triples, the Heat have hit five in a row and now open up a seven-point lead, 33-24 (1;25)

- Iguodala knocks down his second triple of the game after going 2-of-10 for the series. If he keeps hitting from deep that's going to be huge for Miami (2:10)

- Enes Kanter checks into the game against the Heat's smaller lineup, with Crowder and Iguodala the tallest players on the floor for Miami. He's given the Celtics some big mintes in the series and grabs an offensive rebound right away (6:02)

- Jaylen Brown and Marcus Smart connect on back-to-back triples after the Celtics missed their first six attempts from deep (7:14)

- We're just 4 minutes into the game and Kemba Walker picks up his second foul. This time on Goran Dragic, who hits both at the line. (8:05)

- Bam Adebayo gets fouled and buries two free throws for the first points of the game. We're underway in Game 6.

Kemba Walker says the Celtics must replicate their second-half performance from Game 5 from the jump of tonight's Game 6. pic.twitter.com/87kwgfSV9p