For the first time in over a decade, LeBron James will not factor into the NBA postseason.

The absence of James means the microscope will focus even more on the wealth of other stars around the league who all have something significant at stake.

We asked our Global NBA.com writers and editors to give us their picks for which star has the most to prove in the playoffs.

I'm a huge fan of James Harden. Not only would he get my vote for MVP, I think he's had arguably the most memorable regular season of my lifetime.

I also think there's no other player who can benefit from an extended run in which he plays well from start to finish, a run which doesn't necessarily mean even topping the Golden State Warriors or reaching the NBA Finals.

But if you're going to make a case for Harden being the best player in the league - and it's a conversation that he's certainly a part of - then he needs to deliver over the course of an entire series for multiple rounds. Over the last three seasons, he's shot 41.1 percent from the field including 29.3 percent from beyond the arc.

Last season he had this odd penchant for going off in Game 1 and then falling off a cliff for the remainder of the series.

Toss in the no-show facing elimination at home against a Kawhi-less San Antonio in Game 6 in 2017 and there's some skeletons in Harden's postseason closet that have yet to be offset by a truly signature moment. Especially as Harden begins climbing into legacy conversations alongside Dwyane Wade, Kobe Bryant and Jerry West, there's a noticeable lack of postseason pedigree.

This was an easy choice for multiple reasons - and none of those reasons have anything to do with Irving not proving himself in the postseason before.

We've seen Kyrie step up in the playoffs a number of times, like when he went for 41 in Game 5 of the 2016 NBA Finals to beat the Warriors with his Cavaliers facing elimination. Or later that series when he hit arguably the biggest shot in NBA history with his late 3-point attempt in Game 7 to help the Cavs defeat that 73-win Warriors team.

He did it again in The Finals the following year, too, when he scored 40 in the only game the Cavaliers won that series.

But then he requested a trade from Cleveland, parting ways with LeBron James, to prove he can be the guy on a championship contender.

When Irving went down with a season-ending injury last year, his young Celtics team exceeded everyone's expectations and came one game away from returning to The Finals.

And with Irving and Gordon Hayward back to full strength to start this season, the expectations built around Boston were higher than ever. They failed to live up to those expectations and there has been a lingering idea of "just wait until the playoffs" all season long.

Irving has been saying it since back in February and he reiterated it after the Celtics' final regular season game.

So now, the playoffs are here - go out and show us what we've been waiting for all season.

And like I said, what Irving has to prove isn't necessarily performance-based - I want him to prove he can lead this Celtics team to the game's biggest stage.

They were able to get to the Conference Finals without him a season ago, so let's see him take this team to that next step in competing for an NBA Championship.

After leading the Bucks to an NBA-best 60 wins, Giannis Antetokounmpo has firmly cemented himself as a leading MVP candidate.

But with that success comes expectation and for a Bucks team that hasn't made it out of the first round in the past two seasons with Antetokounmpo as an All-Star leading man, the pressure is on to prove that they are a genuine title threat.

This season the Bucks implemented coach Mike Budenholzer's system to perfection, moving the ball and launching a ton of threes, but when the intensity of playoff basketball emerges and the game slows down, will they be able to execute under pressure and prove they're not just a regular season team?

Their success largely lies in the hands of Antetokounmpo. He's leading the Bucks in points, rebounds and assists and while they have plenty of solid weapons around him, they will ultimately go as far as he takes them.

Antetokoumnpo has elevated himself among the league's elite players, but he has to deliver when the stakes are at their highest.

From my point of view, both the Celtics and Kyrie Irving have been a relative disappointment given the lofty preseason expectations. They've had some great games scattered throughout the season where they've showed their potential, but that's what we expected to see more consistently coming off a run to the 2018 Conference Finals.

Instead, the focus of their season has at times been related to finger pointing and seemingly endless drama.

They now have the opportunity to quiet the noise.

After all the drama that surrounded the Celtics during the season, Irving now has the chance to prove that he can take this franchise far. Boston's ceiling hinges on Irving's skills and leadership.

The fight through the East is going to be very hard. This is Irving's time to follow through on Boston's lofty expectations. 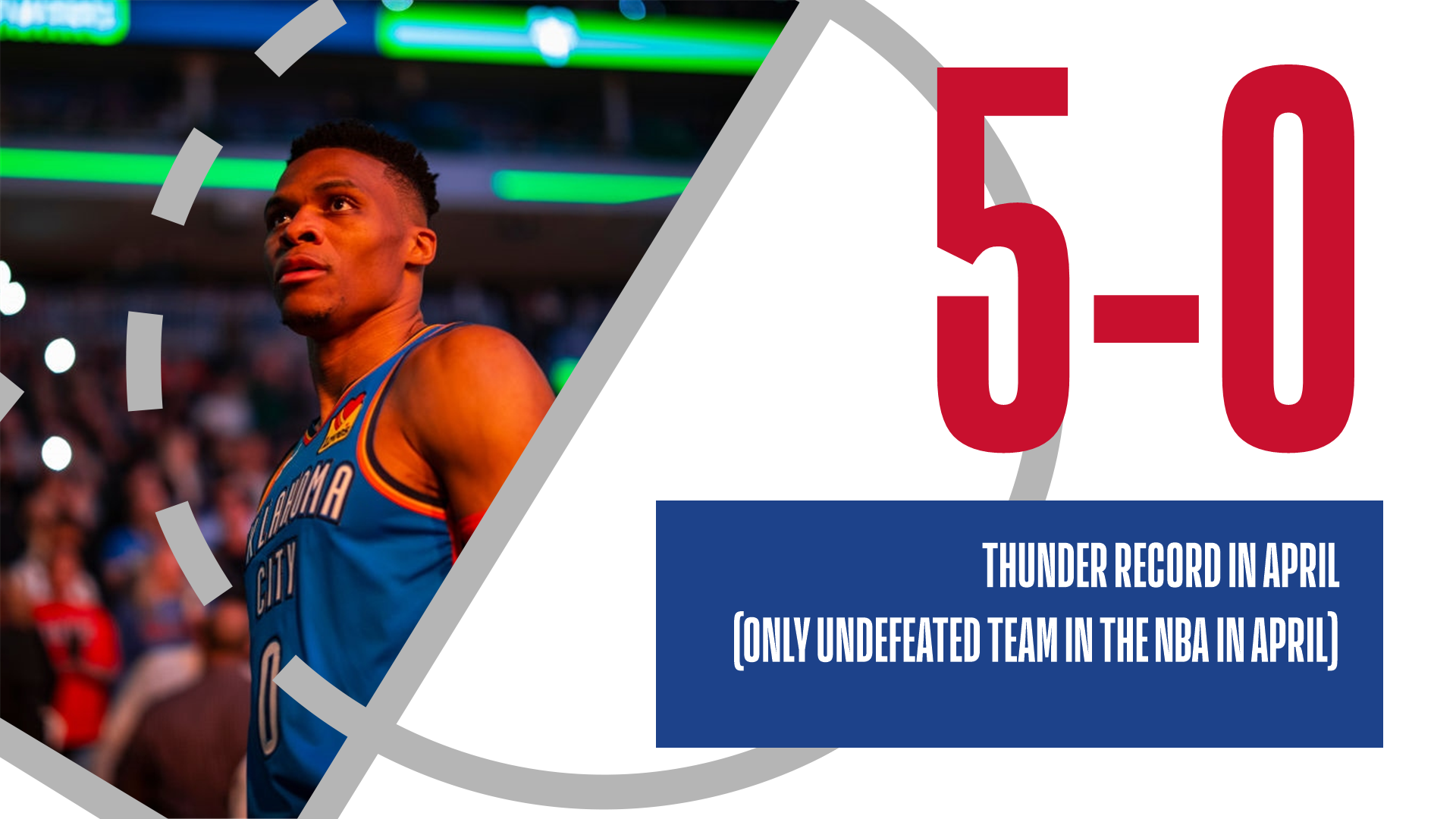 He's averaged a triple-double in each of the last three seasons, but he hasn't been able to win a single playoff series since Kevin Durant left for Golden State.

OKC is a confusing team, both in terms of personnel and production. After a rough March in which they went just 6-10, they've recovered nicely and arrive into the postseason in a good spot. They're the only unbeaten team in April and they've avoided a possible matchup with the Warriors and the Rockets until the Conference Finals.

Westbrook now has the opportunity to erase the memory of last year's early exit in the first round to the Jazz. And he's also in the best possible scenario to prove that he's a good leader. Russ may be the heart of this Thunder team (nobody can dispute that), but this will be a good chance to see if he can share some of that burden to Paul George, as he did during the regular season.

Pay attention specifically to end-of-game situations as the clutch moments in the postseason will be key to taking stock of how Westbrook has evolved.

It´s time, dear JoJo. It's time. Time to show that, as you said, you are the most unguardable player in the league. Time to show the world that you can back up that role of "king of the social media" that you received in part because of your skill in the art of trash talk. It's your time, Joel.

More importantly, it's time for Embiid to be the leader that Philadelphia needs to get to the next level. Perhaps more than any other team given the major moves for Jimmy Butler and Tobias Harris (both of whom are free agents this summer), the 76ers enter the postseason with a heightened sense of urgency. The changes that the franchise made during the season put the team in a position to win now. It's "all-in" time. And in order to succeed, the Sixers needs the unguardable version of JoJo.

It's time to put the injuries doubts to sleep. It's time to show what you are made of. It's your time, Joel.

Given the amazing offensive season he has had, there's no doubt about the fact that James Harden is going to either be the MVP or the runner-up. That would mean he has finished in the top two of the MVP voting in four of the last five seasons.

However, at the end of the day, playoff success matters too.

In his career, Harden has played in all rounds of the postseason (including the Finals) but since he was traded to the Rockets, he hasn't had any signature playoff moments that could define his career.

My colleague Micah has already articulated his shortcomings in the last two playoffs. In 2016, when the Rockets stunned the LA Clippers by coming from 3-1 down in the Conference Semifinals, he was on the bench for a majority of their fourth-quarter run in the improbable Game 6 road win.

So, as Harden continues to put up stellar regular season campaigns, he will be taken seriously in all-time debates only when he adds postseason moments and achievements to back it all up.